In a prior post, we noted how the world vegetable oil stocks-to-use ratio was among the tightest in years linked to increased demand for imported vegetable oils from China as their own internal production has faltered due to a lower amount of oilseeds being crushed.

Also supportive has been the surge in palm oil prices to their highest levels in more than two years linked to ideas that dryness in both Malaysia and Indonesia will reduce their output of palm oil, the most produced and used vegetable oil of all.

As a result, not only have soybean oil futures recently established new highs for the calendar year, but also soybean oil has increasingly captured more of the soybean crush value.

This is reflected in the accompanying graphic that shows the ten, twenty and thirty year seasonal of soybean oil's share of soybean crush value basis Central Illinois along with the 2019 values.

The seasonal of all look similar, albeit at different values with the highs for the year seen from mid-March to mid-April with soybean oil's contribution to the crush value receding from that time and reaching the lowest point of the year in the month of July.

From there, values improve and reach a secondary high toward the end of September-beginning of October before drifting slightly lower into year-end.

The 2019 chart shows a surge from the beginning of the year and then the usual decline into the early summer though values bottomed in June as opposed to July.

The oil share of the crush then has risen in line with the seasonal pattern and now appears to be in the process of topping out.

A couple of observations is that soybean oil's 10-year seasonal shows a lower contribution to crush value than seen in the 20 and 30 year seasonal linked to the recent five year stretch of relatively low soybean oil prices where values rarely exceeded $0.35 per pound.

Note also that the 2019 values until recently were below even the percent seen for the ten-year seasonal. 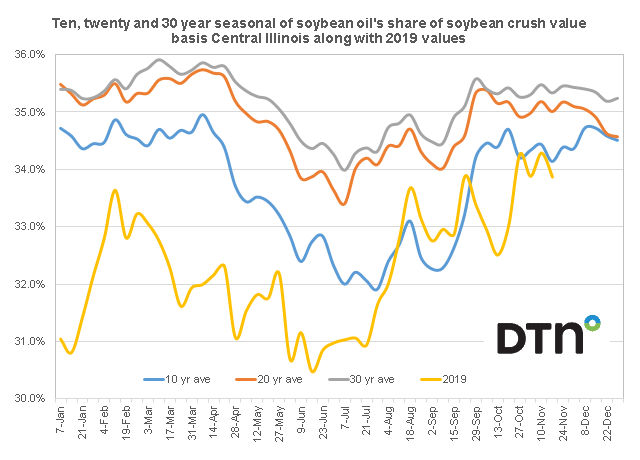