USDA'slatest crop progress and condition report rated the U.S. corn crop 56% in the good or excellent category, up 1% from the prior week.

Crop ratings have held remarkably consistent for most of this year albeit at the lowest levels since 2012.

This graphic is a scatterplot of week 41, or middle of October, U.S. corn crop conditions vs the percent that yields deviated from the 35-year trend.

There is a decent correlation of 79.3% but the linear R squared is a less than desirable 62.9% though a polynomial R squared is a better 66.1% which is what is depicted here.

For the years that are presented in this study, there are four seasons where as now week 41 or middle of October U.S. corn crop ratings have been below the 700 level.

This regression study along with more updated yield reports that often indicate corn yields below recent seasons but certainly better than expected suggests the USDA yield estimate given earlier this month may not change that much in November and January crop reports. 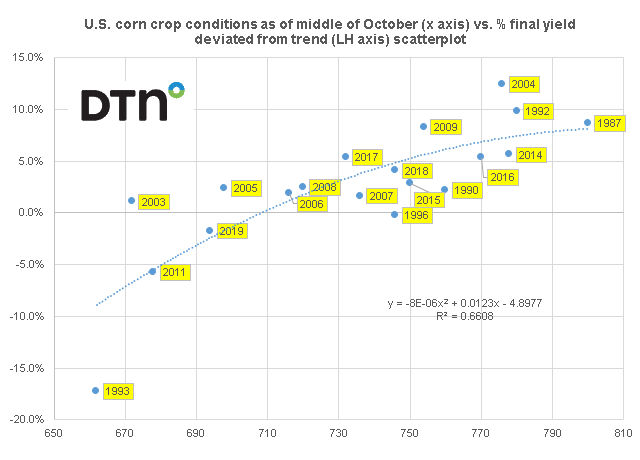