In its latest crop condition and progress reports, USDA noted the U.S. corn harvest was 22% complete, up a mere 7% from the prior week.

The severe winter storm in much of the NW Corn Belt undoubtedly slowed progress; this compares to 38% harvested as of October 13 last year and the five-year average of 36%.

We recall that last year's rain delayed harvest is one of the reasons why the 2018 U.S. corn yield fell by 4.3 bushels per acre, so we were curious whether a drawn out harvest will lead to late season yield declines with perhaps more of the crop subject to weather damage from snows, winds and/or freezing temperatures.

This graphic shows the days after October 1 50%, 70% and then 90% of the U.S. corn crop was harvested on the left hand axis vs. the change in the U.S. corn yield in bushels per acre (bpa) on the right hand axis from the October to the January crop production report.

The trend for these levels are also lower implying that harvest proceeds quicker now than in the past, likely due to enhanced machinery.

Interestingly, years where harvest progress was the fastest such as 1987, 1991 and 2010 all showed yield declines from October to January. 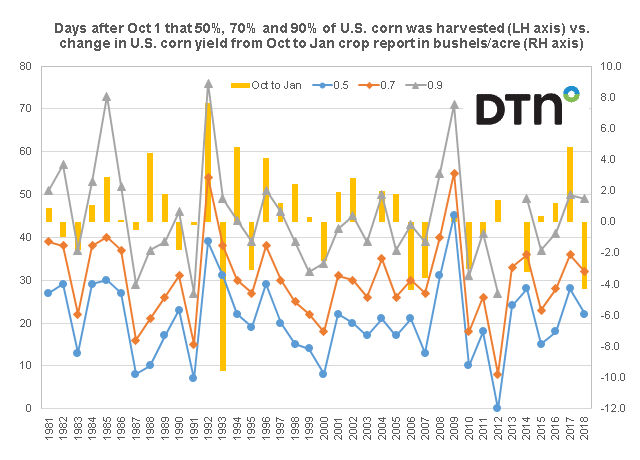