Illinois and Iowa have been the two largest corn producing states for quite a while but their percent of total U.S. corn harvested acreage and production has been slipping over the past two decades.

Due to technological developments such as higher yielding shorter season hybrids and relative changes in crop prices, seedings and output have increased in a number of other states, especially in the Upper Midwest and Great Plains.

The data range is from 2000 to the 2018 November crop production estimates.

The data shows that Illinois's percent of U.S. harvested corn acreage has slipped from around 15.5% to about 13.2% of the national total, a decline of about 13% over the past 19 seasons.

The reason why the decline in harvested acreage has outpaced the drop in production is linked to higher yields in these two states relative to the rest of the country.

While other states may continue to increase their percent of corn harvested area and production at the expense of Illinois and Iowa, both states blessed by good soils, tiling and favorable geographical locations for growing corn should continue to be the top yielding states for the foreseeable future.

Note that Iowa and Illinois have been the top two yielding states for the past three seasons. 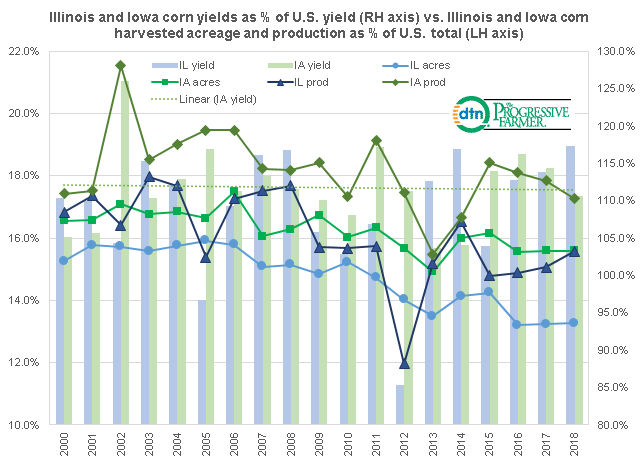