This graphic concludes our series looking at the amount of key crops that have been exported and shipped as of the third week of November from the start of the marketing year in aggregate terms, and also as a percent of the USDA's November WASDE export projection.

This time it is wheat and if the corn and soybean posts were hardly inspiring, the one for this grain is downright desultory.

The latest USDA U.S. wheat 2018/19 export projection was unchanged from the October 2018 WASDE figure of 1.025 billion bushels but this is still well above the year ago 901 million bushel final figure.

As of the third week of November, the U.S. had sold 533.3 million bushels of wheat since the marketing year started June 1.

Meanwhile only 343.4 million bushels have been shipped as of the third week of November and that is the lowest figure we see going back at least to the 1990/91 marketing year.

These total exports are only 52.0% of the 2.015 billion bushel projection.

There have been expectations that as the Russian exportable wheat supply diminishes this will result in enhanced U.S. wheat being sold overseas, but unless this happens in a hurry, we expect USDA to have some major downward revisions in its U.S. wheat export projection in subsequent WASDE reports. 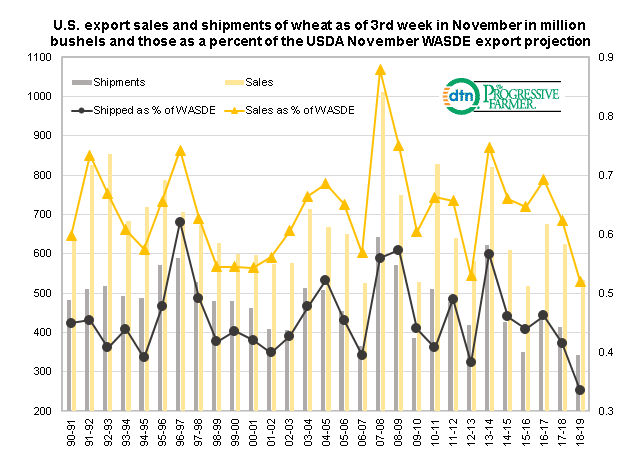