The accompanying graphic here helps illustrate the impact on the farm sector from the current trade disputes the U.S. is engaged in.

This is no small consideration as attention turns to the upcoming meetings between the leaders of the two most powerful economic nations in the world in Argentina this week.

We are just focusing on soybeans and the devastating impact that the boycott by China, the world's top oilseed importer on U.S. soybeans, has had on our sales and shipment pace since the new marketing year started September 1.

Through the third week of November, we have sold 831.4 million bushels of soybeans, the lowest total since the 2011/12 marketing year and the second lowest total in the past decade.

The 400.2 million bushels shipped as of the third week of November is also the least for this point in the marketing year since the 2011/12 marketing year and again the second lowest total in the past decade.

It appears that unless sort of breakthrough is achieved this week in Buenos Aires, the USDA's current soybean export forecast will have to be revised lower in subsequent WASDE reports.

This along with what appears to be the makings of a monstrous South American soybean crop continues to weigh on our soybean prices. 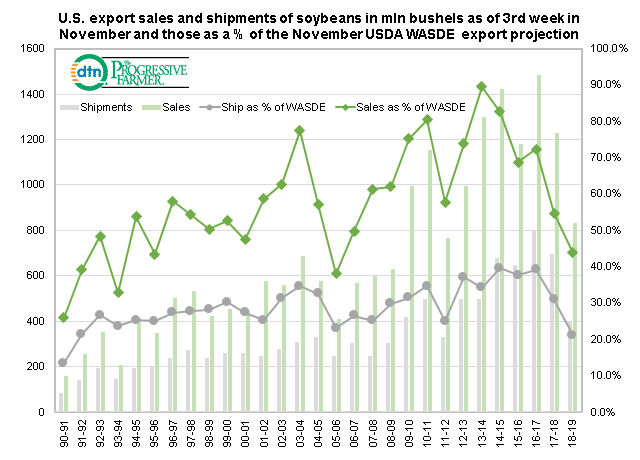