Trade woes or not, the corn market most likely would have retrenched in value over the past month regardless based on generally favorable growing conditions resulting in some of the highest corn ratings ever for this time of year.

This has prompted a number of analysts to start hiking their expected 2018 U.S. corn yield with figures as high as 180 bushels per acre (bpa) being bandied about vs. the current USDA estimate of 174 bpa and this would by far exceed the year ago record of 176.6 bpa.

If this is the case, then we expect the ultimate low to be set later as opposed to earlier in the year as the old saying goes big crops get bigger.

If weather conditions remain decent, the trade will expect the USDA to ratchet up its yield estimates each and every month from the first official estimate in August to the final one in January in a pattern seen last year.

This chart shows the date in the green ovals that December corn sets its low from the period January 1 to November 30, right before the delivery period for the December futures contract starts.

Also plotted on the left hand axis is the average U.S. corn crop rating for the month of August for the years 1986-2017 using our usual ratings system (where we weight the crop based on the percent in each category and assign that category a factor of 2 for very poor, 4 for poor, 6 for fair, 8 for good, and 10 for excellent and then sum the results).

On the right hand axis is the percent that final corn yields deviated from the 1986-2017 trend.

We note that correlation between the average August crop rating and the % yield deviation is a very high 86.5%.

The latest 2018 crop rating is 780 and if that level were maintained through August a simple regression model projects that to a yield 6.3% above trend and if one uses a trend of 170 bpa this works out to 180.6 bpa.

If yields this year turn out to be as good as advertised one could say that the low in the December contract at $3.60 probably will not hold though keep in mind the world corn stock to use ratios is the second lowest ever and any cooling of trade tensions between the U.S. and China could spawn a sharp rally. 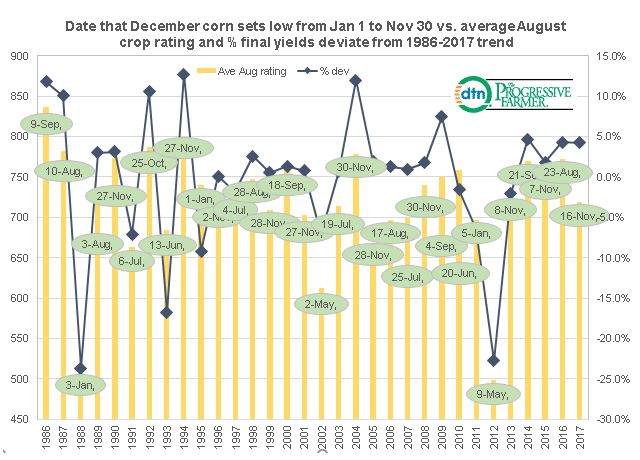