Since the 2012 drought, the U.S. has seen a nice string of impressive national corn yields with all-time highs being set in three of the past four seasons including back-to-back records this year and last.

In light of that, this graphic shows the ten, 25 and 40-year annual trend changes for corn yields in the top 18 producing states and the U.S. as these figures are the slopes of the linear regression line for each of those time periods.

For the most recent period, which is 10 years, shows NC and TN with the strongest yield growth over the past ten years, in excess of 5 bushels per acre (bpa) annually on a trend basis followed up by KS and MO over a 4 bpa increase per year.

For NC, the sharp advance may have been due to the trend period starting with a well below trend yield but for the other three that was not the case.

The 40-year trend tends to smooth out the year to year variability in yields and besides TN, the other states that have averaged at least a 2.00 bpa increase in corn yields annually over the 40-year period has been IA, MN and SD.

These three Upper Midwest states have seen yields increase based on more favorable weather conditions such as cooler temperatures and the increased plant population density as compared to other states.

Another interesting observation is despite increase corn plantings in the Plains states, Colorado's ten-year trend is actually negative as is the 20-year trend in Kansas. 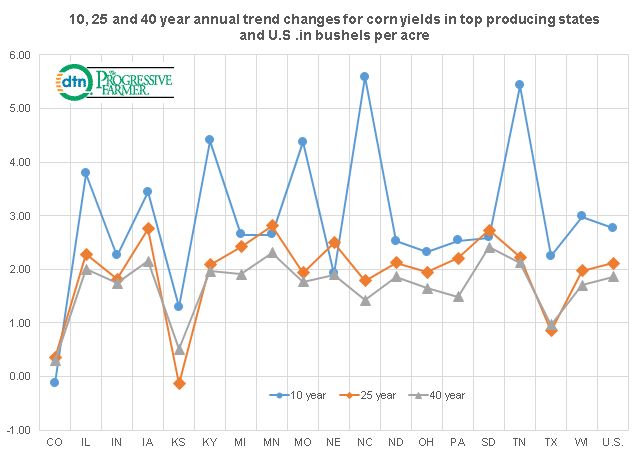