The USDA reported this week that as of Sunday September 24th 51% of the U.S. corn crop was mature and while that was 17% ahead of the prior week it is 19% behind the year ago pace and 13% below the five year average.

These are just states that show maturity at least 20% below average and there are a number of states that have corn maturity levels lagging at least 10-19% behind their respective five-year averages.

These lagged rates of maturity are raising concern about the impact of a fall freeze on corn yields in these states, not a small consideration given that the calendar will roll from September to October this week and many of the states are in more northern locales.

So far Mother Nature has cooperated for after a very cool August readings in much of the Corn Belt have been well above average, even record high with some states having a far warmer September than August and this is pushing the crops to maturity.

This graphic shows the percent of the U.S. corn crop that is mature as of September 24th vs. the percent that final yields deviated from the 30 year trend.

Also reported is the change in yields from October to the final report issued in January in bushels per acre (bpa).

With this year's crop lagging we were wondering if other years when corn maturation rates were delayed did this lead to below trend yields or a reduction in yields from October to January as a result of a freeze cutting yields.

Each year is different and even if a freeze came along it may not have had much impact if corn plants were physically mature or if the freeze came in areas where the crop was already mature.

In recent seasons we see that in 2014, only 50% of the crop was mature as of September 24th yet final yields came in 5.8% above trend even with a yield reduction of 3.2 bpa from the October to the final report.

Note in 2008 and 2009 the September 24th rate of maturity was 41% and 30% respectively yet final yields each of those years was above trend. 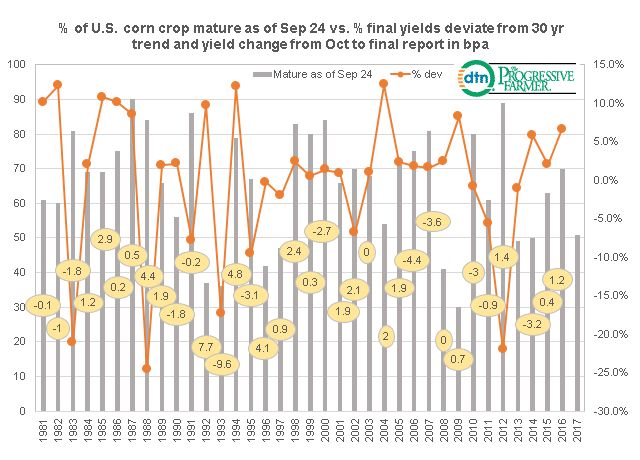