Corn market action has been a little perky of late reflecting a bounce from technically oversold conditions, the realization that the funds are probably short close to 100,000 contracts and some evening up of positions ahead of the September 12 crop production figures.

With regard to the upcoming USDA report, sentiment seems to be the U.S. corn yield may not change significantly from the 169.5 bushel per acre (bpa) projection given last month.

An examination of crop conditions as of September 1 would seem to corroborate this contention with U.S. crop ratings actually slightly above average implying trend yields that for this year are seen in the 168-169 bpa range.

States outside the core Midwest region seem to have fared best this year with Pennsylvania leading the pack with its highest ranking ever as of September 1 with current crop conditions a whopping 21.5% above the 1986-2016 average.

On the other hand, South Dakota has the lowest rating of 626 and this is the fourth lowest ranking since 1986 as they are 12.4% below their average with North Dakota having a rating of 656 which is 9.4% below its average.

Other than these two states the current crop ratings imply no real disaster which could result in final corn yields very close to the USDA's August 2017 projection. 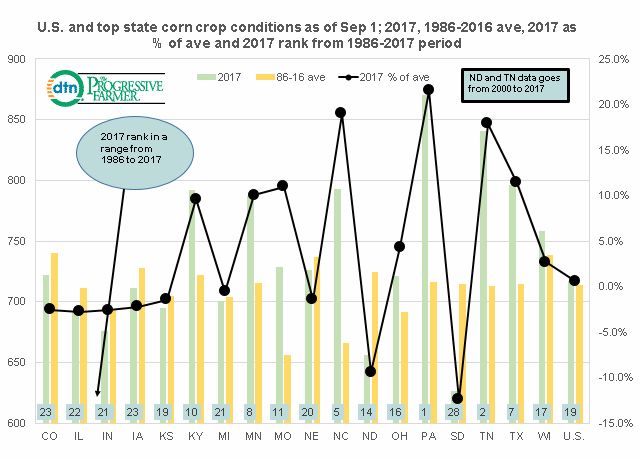