With the funds already long and the near-term weather forecasts showing more rains and much cooler temperatures than has been seen this season, soybean futures were unable to push higher in the wake of some lower weekly crop condition reports than the trade had been expecting.

An earlier post noted that national soybean crop conditions are the second lowest since 2006 though similar ratings has not prevented final U.S. soybean yields from reaching calculated trend or higher levels.

In this piece we look at the individual 18 states that make up the national soybean crop rating using our usual ratings system (where we weight the crop based on the percent in each category and assign that category a factor of 2 for very poor, 4 for poor, 6 for fair, 8 for good, and 10 for excellent and then sum the results).

These ratings are for week 29 which is the past Sunday, corresponding to about the third week of July and reported are the 2017 rating, the average week 29 rating for the period 1986-2016 (with the exception of ND and WI where the average goes from 2000 to 2016) and finally where each states current crop rating ranks from 1986-2017 with 1 being the highest ranking and 32 the lowest.

First off, we note and has been widely discussed, the best conditions are those in the more northern and southern states with the worst conditions in the Western Corn Belt and of course the Plains.

Given the extreme drought in the Northern Plains it is no surprise that South Dakota has its worst week 29 soybean rating ever with conditions down 25% vs. year ago levels.

Nebraska has its sixth worst crop, Kansas its ninth worst and Iowa its seventh worst.

On the other hand Louisiana has its second best rated soybean crop as of week 29 with Arkansas and Tennessee each having their fourth best crop as growing conditions in the Delta have generally been favorable all year.

As noted in the piece discussing the national situation, soybeans are known as a crop of August so it will be interesting to see if less stressful growing conditions result in some sort of improvement for those states that right now are not faring so well. 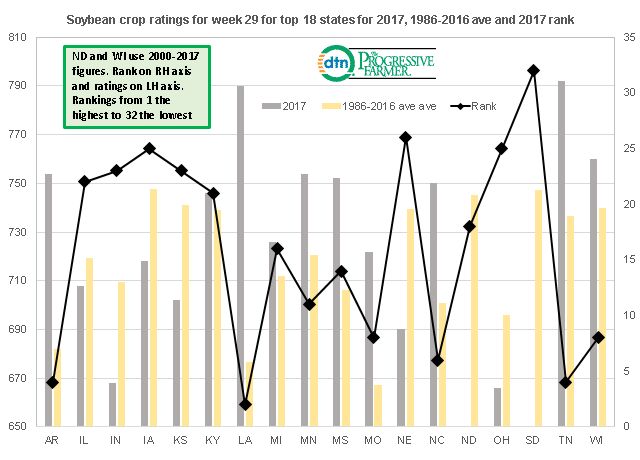