The drought in the Northern Plains shows no signs of abating and given the latest weather forecasts conditions for the main crops grown in that region of the country could deteriorate even more.

Action in oat and spring wheat futures has been dynamic to say the least as a large bulk of the nation's crops is grown in that region of the country, particularly North and South Dakota.

Action in the row crops however has been just the opposite with new crop corn futures falling to their lowest levels since last September and new crop beans down to values seen last August.

Despite a less than desirable growing season so far this year, corn and soybean futures have been contained by large domestic and world stocks, an imminent end to any substantial U.S. export business over the next few months, and the highest soybean planted area ever and indications that even a wet, cool spring did not result in that much intended corn acreage from not getting in the ground.

As we have pointed out in prior posts however, both North and South Dakota have seen their combined percent of U.S. corn and soybean planted acreage and production increase rather dramatically in recent seasons.

Hence, a continuation of adverse weather could result in greater national bushel losses for both crops nationally than perhaps the trade is anticipating.

This graphic, which shows the combined planted acreage and production from both North and South Dakota as a percent of the national total, shows corn acreage moving from about 6.5% of the U.S. total to as high as 10.5% in recent years with production moving from 5% to as high as 9%.

The increase in soybean area and output is even more striking moving from 8.5% to 13.5% and 7% to 12% respectively since 2000. The percent gains in production have lagged the increase in acreage as both states have yields below the national average though they have been catching up over the past decade. 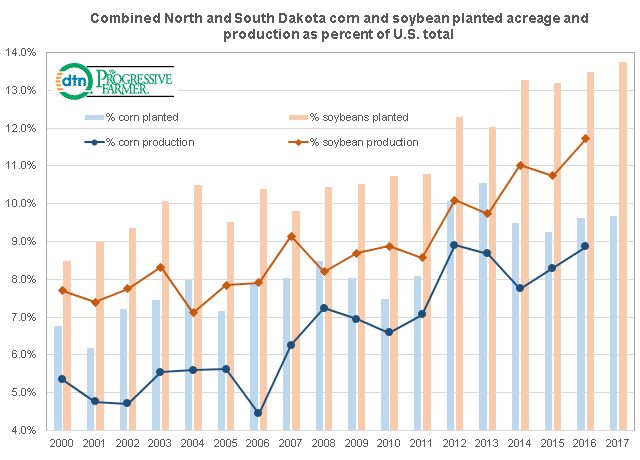