There must be a dearth of news in the grain and oilseed markets given the amount of attention the upcoming planted acreage estimates from the USDA at their annual Outlook Forum is generating.

These are essentially computer-based estimates for the most part though the all wheat planted figure does have some fundamental basis given that the winter wheat seedings report is released in January.

New crop futures and forward cash prices along with various crop price ratios, net prospective per acre returns and crop insurance guarantee levels are also some of the criteria that are used to generate these projections.

Nonetheless, these figures can and often vary substantially from the government's survey of farmer intentions as reported in the Prospective Plantings report released the end of March.

This is reflected in the attached graphic that shows the change in planted area projections from the USDA's February Agricultural Outlook that is held usually the third week in February and the end of March prospective plantings report for corn, soybeans and wheat in 1000 acres.

Note how farmer intentions can vary substantially from the government estimates especially in the case of corn.

This was particularly true last year when the March intentions pegged corn acreage 3.60 million acres above the February estimate, the large positive deviation in our database though in 2008 the prospective plantings report showed corn area about 4.0 million acres below the February Ag Outlook projection.

As one can see, the differences between the two acreage estimates can be sizable but as measured by the coefficient of variance which is the standard deviation divided by the average it is corn that is the most variable with a CV of 14.75 which is about three times that of soybeans.

Also given what we mentioned earlier with the USDA having at least some information about wheat plantings given the release of the winter wheat seedings report about six weeks earlier the CV for this commodity is by far the lowest at 2.36. 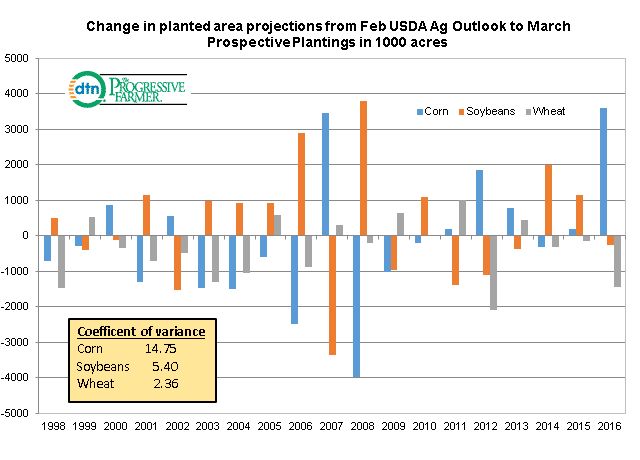