By using its comparative advantage in producing corn via use of the best seeds, inputs and technology, the U.S. has much higher corn yields than any other exporting nation.

This chart shows the 2015 corn yields for the U.S. and a number of other countries in bushels per acre.

Even though the U.S. does have the highest corn yields, the rate of growth in yields is well below those of other countries, though we are starting from such a high level.

This is particularly true for Brazil, South Africa and Ukraine.

Though China reportedly has huge domestic stockpiles of corn, this is based more on large tracts of harvested area as opposed to higher yields as severe pollution and their refusal to use GMO seeds has constrained their yield growth.

Argentina is another interesting story as their 10 year CAGR lags behind their 20 and 30 year CAGR by a wide margin as the onerous export tax on Argentine corn has stymied new research and investment to enhance yields, though with a new President this may change. 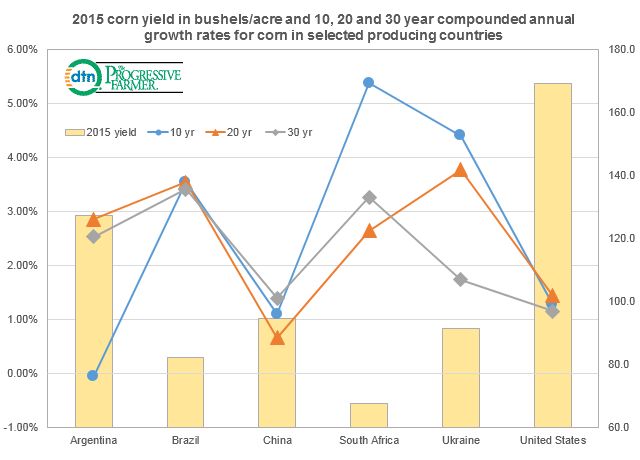 Freeport IL
12/7/2015 | 1:10 PM CST
Sorry typing errors - 4 to 1 asset to debt is insolvent in two year with an annual asset decline of 30%. Freeport, IL
Freeport IL
12/7/2015 | 12:39 PM CST
A periodic review of "risk" to a Northern Illinois farm was completed over the weekend. The normal two year horizon also included a multiyear - 1980 like, event. The running of this analysis required the understanding of what happened in the 1980's. Many causes have been noted: high debt (The end of the 1970's was a profitable time and expansion was desired to "make room" for the next generation. They generally wanted to return to the farm. Also remember families tended to be larger back then.), high interest rates, Carterâ?™s Gain Embargo, unsympathetic Government (The goal/vision at that time was to balance the budget.) declining value of land and equipment and low commodity prices. (Iowa Public TV has an hour and half documentary on the subject. It is quite good but hard to watch for the remembering. http://www.iptv.org/mtom/story.cfm/story/11604/frc_20140324_farm_crisis/video ) Many have suggested a 1980's like event could not happen today. They contend our debt is lower, interest rates are lower and asset values, especially land, are stable. We question that assertion. An operation with a 4 to 1 asset to debt ratio would become insolvent in two years with annual asset declines of 15%. If rates were at 21& (the peak of the prime interest rate) and delinquent loans were rolled to the next year, insolvency might occur in the third year. The same deal with a 5.0% rate, insolvency occurs in the fourth year. So declining asset values could be more damaging than high interest rate. Although we can cash flow declining asset values, the environment that causes lower asset values also decreases cash flow making a very challenging situation. Multiple years of low commodity price could cause this environment. The cause of low corn prices - corn was the focus of our risk review, is more supply than demand. This generally means too many bushels and/or to many acres. When corn price start heading lower, the planted acres tend to drop. So for multiyear low corn prices to occur, yields need to have multiyear high yields. It has been postulated (Sorry we do not remember who said that. It may have been Elwin Taylor.), we are heading into a period of more volatile corn yield swing because of the changing weather patterns. If one compares the 16 year period from 1996 through 2011 with the sixteen year period from 1980 through 1995, there seems to be more stable yields from 1996 through 2011. We grouped US harvested yields in a 2% range up and down from trend line (98% to 102% of trend). In the 1996 to 2011 time frame, this range occurred eight times (50% of the time). The earlier time period only occurred two times (13%). Trend yields above 102% occurred 6 times (38%) in the later period and 8 times (50%) in the earlier period. The average was 105 versus 109% of trend for the 80's through early 90's. Only twice (13%) in the 1998-2011 period were yield under 98% of trend with the average decline of 6% (94% of trend). Six times (38%), the early time frame saw yield under 98% of trend. The average decline was 15% (85% of trend). So not only were high yields and low yields more likely to occur they occurred at more extreme levels in the earlier time frame. The early 1980's saw these high yields occur in back to back to back years causing large ending corn stocks. The poor years reduce stocks. The 1988 drought, although painful to go through, could be credited with the drawdown of extra supply that was part of the 1980 farm crisis. The early 1990'ss saw high yield but they were followed by a year of low yields keeping ending corn stocks in check. The 1980 farm crisis started with ending stocks 30% of use for corn. It peaked at over 60%. Our inquiry indicates, if we can keep planted corn acres under 90 million acres, there is no chance of 30% stocks to use next year, 10% chance in two years and around a 15% chance in 3 to 5 years. When we limited yields to the more volatile fluctuations of the period of 1980 through 1995 there seemed to be an increased chance of 30% ending stock ratio in the early years and a lower chance as time goes by. It seems the longer we go in a volatile year pattern, the higher the likelihood of catching a drought. The drought reduces stocks and thus lowers chances. If there is a weather pattern that is repeatable and if we are in that pattern now, there could be a 15% chance (about once in seven years) of 30% ending stocks to use ratio in the next two years. After that the chances seem to peak at 10%. Volatile yields reduce the chance for a 1980's type calamity in the longer run. Marketing in that environment can be quite challenging - maybe more on that later. Freeport, IL