The November USDA crop report did report a higher 2014 national soybean yield of 47.5 bushels per acre (bpa), up 0.4 bpa from their October estimate.

This was very close to the average trade guess though not as high as the 50 bpa level that some had speculated upon early in the harvest.

Still this is a record U.S. yield and as expected a number of the top states set all-time highs.

Similar to a piece we did recently on corn, the accompanying graphic shows the 2014 and 2004-2013 average soybean yield in each of the top 18 producing states and also plots the 2014 yield as a percent of that ten year average.

Over the past ten years Nebraska has achieved the highest average soybean yield followed up by Iowa, Indiana and then Illinois.

This year Illinois takes the crown with a record 56.0 bpa yield with Indiana, Louisiana and Nebraska tying for second place at 54.0 bpa.

The performance of Louisiana is particularly noteworthy for not only did it achieve a record yield by far but one 38.5% above the ten year average, the highest percent of any state.

With the growing season superb for the most part, all 18 top states had 2014 yields above their respective 10 year averages with the southern states such as TN and NC in addition to LA doing quite well while yields in the more northern states like IA, MN, and WI were close to their ten year averages. 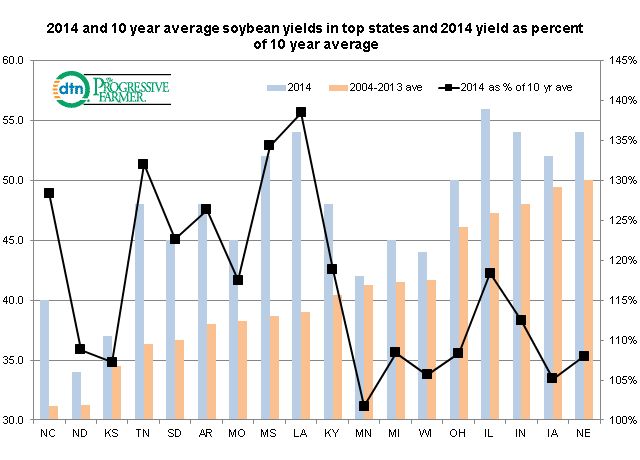