After having moved to a six month low earlier this month, soybean prices have staged a strong recovery, bouncing more than a $1.00 per bushel off these recent lows.

Supporting values have been ideas that the strong export pace with total sales a mere one-third into the marketing year at 90% of the projected USDA total and robust processor demand will totally exhaust domestic supplies prior to the start of the 2013 harvest.

There is also building concern about extended dryness in areas of Argentina and southern Brazil while northern Brazil, on the other hand, is plagued with excess moisture that is delaying early harvest activity.

Keep in mind that soybean prices remain at record high levels for this time of year based on reduced crops in the top three global producers last year.

The accompanying chart shows the percent deviation from the 20 year trend for the world’s top three producers in the year harvested and indicates that 2012 is the only year going back to 1992 where final yields for each country were all below trend.

One reason for this is production in South America was also hurt by drought with the 2012 crop in Argentina and Brazil off 18.2% and 11.7% respectively from what was harvested the prior year.

Even though the latest USDA World Ag Supply-Demand report (WASDE) is estimating the 2012-13 Brazilian soybean crop at 3.031 billion bushels and the Argentine crop at 1.984 billion bushels, these supplies will be harvested in 2013, starting now and continuing into May.

Previous Post (What Should 2013 Trend Yield for U.S. Corn be Estimated At?)
Next Post (Implied Corn Fed Per GCAU vs. Avg Sep-Nov Corn Futures Price) 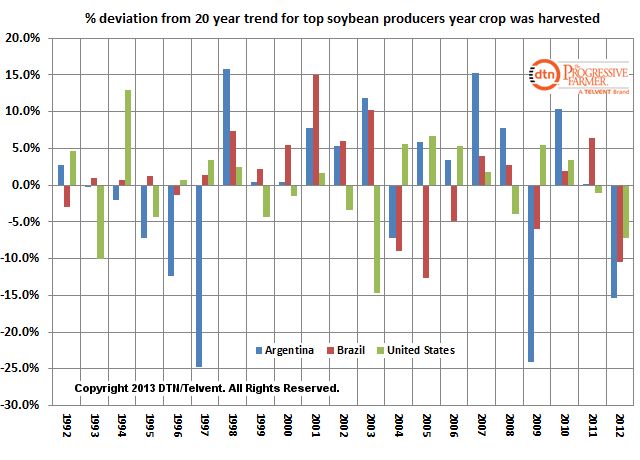