LAVISTA, Neb. (DTN) -- ClearFlame Engine Technologies' ethanol-diesel engine will head to the field for testing in a John Deere 9-liter model, perhaps in tractors and harvesters in the fourth quarter of 2022, said ClearFlame CEO BJ Johnson.

Johnson shared the news with a group of ethanol producers and farmers during a Nebraska Ethanol Board forum in LaVista, Nebraska, last week.

Semi-truck diesel engines have been the center of attention for ClearFlame, but Johnson said the company is taking aim at other key hard-to-electrify sectors across the country.

Johnson said ClearFlame will be part of a pilot program this summer involving utility companies in the Midwest, testing the ethanol-diesel technology in the portable box generators.

"I think this is a market opportunity that the ethanol sector shouldn't lose sight of," he said.

"Trucks and tractors are kind of obvious, but we shouldn't forget the role that fuels have to play in our power grid, and this is only growing. Grid resiliency is a really big topic right now. You see it in the West Coast when they have their wildfires, in the Southeast during hurricane season, Texas a little over a year ago had that whole debacle," he noted.

"Right now, we have no way to keep the grid up than by taking diesel generators and moving them around the country. And there's no reason we can't meet that same exact market need as a diesel fuel engine in a box that makes electricity just using a ClearFlame-enabled engine and ethanol as the fuel," Johnson said.

When it comes to the farming community, questions about the ClearFlame technology center on what the ethanol-diesel engine would mean for emissions compliance and whether running ethanol will be cost-effective compared to diesel, Johnson said.

Running a diesel engine on ethanol would virtually eliminate soot and other emissions typically seen from diesel, he stressed.

In an interview with DTN, Johnson said the mileage in running ethanol in a diesel truck will change with the ClearFlame engine.

He said on an energy-equivalent basis it takes about 1.6 gallons of ethanol to equal a gallon of diesel. Because there is a wide historical price spread between ethanol and diesel, it would still be less expensive to run a diesel engine on ethanol, he noted.

"So, what that means is you will have to refuel a little bit more frequently or carry a slightly larger tank," he said.

"Now, there's two reasons I'm not particularly concerned about this. First of all, ethanol is cheap enough that even if you have to consume more of the fuel -- so even if your miles per gallon are going down -- your dollars per mile or dollars per hour are also still decreasing because the fuel is that much cheaper than diesel."

For about the past five or six years, diesel has been priced at about $3 and ethanol at under $1.50. "It's actually a very compelling fuel cost savings," he said.

"And, also, when we talk to fleets about would they rather manage a slightly larger tank or just fuel a little bit more frequently, your typical diesel truck will have about a 1,200-mile range. Having to refill at 700 miles isn't bothering most fleets. And those that do can again just carry a little bit larger tank."

When it comes to power, torque and all performance metrics farms have grown to expect from a diesel engine, Johnson said the ClearFlame technology has been able to maintain those characteristics.

ClearFlame uses a different fuel-injection system and a higher temperature-combustion process, he explained. "And when you marry those two things together, we're finally able to show you can get all of those same exact diesel performance parameters that you expect."

The role ethanol can play in an overall carbon-reduction strategy has been largely overlooked by the Biden administration, which is pushing for expansion of electric vehicles.

President Joe Biden's 2050 climate action plan is banking on what electrification and hydrogen can do for the transportation sector.

However, Johnson said the administration also expects more CO2 reduction in transportation to come from low-carbon fuels than it is from either electric vehicles or hydrogen, as part of that plan.

Replacing diesel fuel with ethanol could lead to a gigaton of carbon reduction in the U.S., he said.

Currently, U.S. ethanol producers have the capacity to produce about 17 billion gallons per year -- or just about 11% of what it could take to replace diesel with ethanol.

Johnson said he hears many questions about the viability of ethanol as an economy-wide carbon-reducing fuel when compared to the future of electric vehicles.

When it comes to ethanol, the data is unmistakable: Its overall carbon-intensity score is equal to -- if not better than -- electric vehicles as things stand today, he said.

A lot of environmental groups are asking whether enough ethanol can be produced to replace diesel-burning engines.

"That's actually one of the big misconceptions that I run into when I say we run our truck on E98," Johnson said.

"People say you can't get that fuel. I think there's some sort of misconception that ethanol comes out of ethanol plants as E10 or something like that. As you all know, the economics of ethanol are very competitive, and also a reduction in carbon emissions that is comparable to that of an electric vehicle, and this has been validated by a lot of groups out there," Johnson said.

In particular, the likes of Harvard University, Tufts University and Massachusetts Institute of Technology, have found ethanol to have a 45% to 50% reduction in CO2 relative to fossil fuels.

"So, it's not perfect, and I don't think we should be out there conveying that we think ethanol is a perfect fuel, but it is very similar to the level of carbon reduction that you get from switching to an electric vehicle today, because the grid isn't perfect either," Johnson said.

Though electric vehicles are considered by environmental groups and others to be the future of all transportation, Johnson said there generally is agreement that long-haul freight trucks are unlikely to move away from liquid fuels soon.

"So, people will kind of argue a little bit over how quickly something like these trucks can electrify," he said.

"The same argument exists in passenger cars, of course. I do believe that electrification is a when, not if, but I think it's important to remember that when is really sector dependent."

Though many ethanol industry representatives are eager to go on the attack of electric vehicles, Johnson said ethanol needs to continue to improve its performance in response to the EV challenge.

"I don't think taking a run at EVs is a viable strategy," he said. "Yes, it's true they pitch themselves as emissions-free when they're not because the grid is not clean. All those things are true, but at the end of the day, they have a chance to improve their product, they deserve that chance. The ethanol sector can complement that opportunity."

In some circles, the view is ethanol is a fuel that can be converted into even less-carbon-intensive fuels, including renewable diesel.

"ClearFlame is saying that's just the wrong strategy for this market," he said.

"Take the engine and modify it so that you guys don't have to worry about making some other fuel."

Johnson said his company continues to face several narratives when presenting its technology to various companies and others.

Ethanol has the opportunity to eliminate the notion that moving to green technologies comes at a premium price.

"But I think there is an opportunity to go on the offensive here. If we're serious about our climate goals, you need this fuel and you need to listen to this story." 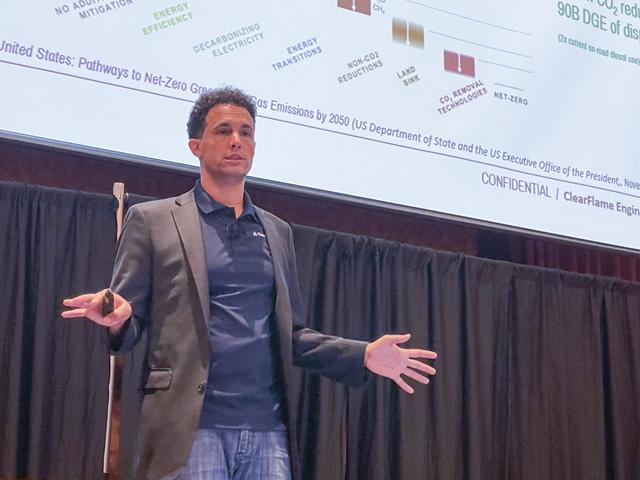