Though ethanol and oil producers face virtually the same economic challenges from the COVID-19 economic shutdown -- lower demand for fuel and lots of supply -- EPA Administrator Andrew Wheeler said during a hearing before the Senate Environment and Public Works committee on Wednesday that he's been focused on helping refiners.

"I have talked with a number of small refiners all over the country and we are working with them to see what we can do to help them during this time," Wheeler told the committee.

During his appearance before the Senate committee, Wheeler said his agency understands both industries are hurting but a decision has not been made on recent waiver requests to the Renewable Fuel Standard.

"This was a double hit to the program, not just with the 10th Circuit decision but also in the decrease in the number of vehicle miles traveled by Americans right now," he said.

"We have extraordinary circumstances this year and we are looking to see what relief we can provide everyone. The ethanol industry is also hurting as well."

Wheeler said the reduction in gasoline consumption is a "particular hardship to refiners."

Sen. Joni Ernst, R-Iowa, said it was difficult for refiners to argue the RFS has been the cause of their financial challenges.

"This is frustrating to me and to my farmers in Iowa," she said.

"And time and time again we're seeing these battles play out around the RFS program. It is my hope that EPA follows the precedent around this provision established by both Republicans and Democrats, that this waiver requires clear evidence that the source of economic pain is the RFS and not these other factors."

Wheeler said "everything the administration has done" looks at past precedence on making these decisions.

Earlier this year the ethanol industry won a critical lawsuit in the U.S. Court of Appeals for the 10th Circuit in Denver, when the court ruled EPA mishandled three small-refinery exemptions in 2017 and 2018. After the 10th Circuit denied refiners' request for a rehearing of the ruling, the agency has been left to decide whether to apply the ruling nationally.

Applying the ruling nationally would effectively mean the end of how the program is implemented currently. During the Trump administration the EPA has granted 85 waivers.

As a result of the economic slowdown just 60 of the nation's 204 ethanol plants are operating at normal production. Still, the EPA has received a wave of requests from oil-producing states to waive the Renewable Fuel Standard because of COVID-19, based on the costs to comply.

During a press call with Iowa reporters on Thursday, Ernst said the Wheeler hearing, "was frustrating. Let's just put it like that. I learned very little that was new."

Ernst said she had asked Wheeler about both infrastructure and relabeling issues related to ethanol, in particular when it comes to E15. During a White House meeting last fall, Ernst said Wheeler said the agency would be eliminating E15 warning labels.

"He really stalled on that and said they found some complications and will have to work through those," she said.

"It just seems like the EPA continues to drag its feet. We will continue pushing on these issues."

When asked about the possibility EPA could use a new executive order on regulatory relief and apply that to petroleum refiners, Ernst said she and other senators would be pushing the president on that issue and not just EPA.

"We need to ensure any sort of relief for refineries that they are applying equally to the RFS," Ernst said. "It is really important that they understand our ethanol products are part of those petroleum products going into our vehicles." 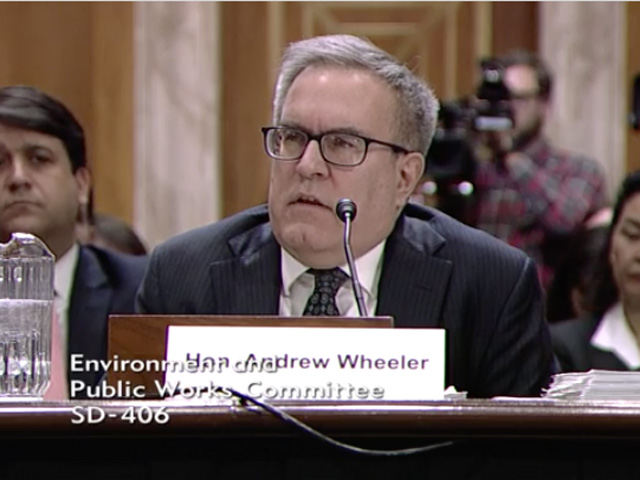