Editor's Note: Progressive Farmer Senior Editor Joel Reichenberger helped our team walk away with 44 national writing, photography, design and other content awards at the Ag Media Summit held in Kansas City, Missouri. Joel ruled over the photo contest held by AAEA: Ag Communicators Network, including walking away with the top Photographer of the Year and Photo of the Year. The winning photo accompanies this piece, and Joel tells us the great story of how it came to be below. Congratulations to Joel and the whole DTN/PF team!

There was never a better time of the year on the Kansas farm where I grew up than wheat harvest, and for plenty of reasons.

Wheat harvest was my first source of income, my first job, shuttling the tractor and grain wagon from the edge of the uncut wheat to the trucks' end of the field. I was too young to be trusted with more that first season.

I loved spending the day on the tractor, listening to Royals games or reading a Tom Clancy book while waiting on the combine -- the toolbox on a John Deere 4020 is just big enough for one of those thick paperbacks, for what it's worth.

I loved the long days that stretched well past sunset. I loved the late family dinners, after the elevator had closed and when we'd filled the trucks.

And I loved the view, the golden wheat, the blue sky and, often much to my dad's chagrin, the towering white thunderheads building and approaching throughout an afternoon until the sky goes dark and the rain comes down.

So, it came as no surprise to me when last summer, as I was in a golden Kansas wheatfield at harvest time, a storm came up. I snapped away with my camera until the moment the rain arrived.

One of those photos was earlier this month named the "Photo of the Year" in the AAEA annual contest.

I certainly realized early on that there's a lot of luck that goes into photography. I won the AAEA Photo of the Year in 2017, as well, with a shot from a story I did about farmers in the Swiss Alps. I'd done a bit of research to find the location but got awfully lucky to wake up to low-hanging clouds that were interesting rather than overcast, and to find a farmer who carried around a scythe like it was the year 1654.

And, no question, I got lucky I was in that wheatfield last summer when a storm came up.

I was on the farm for a story about technology, and after an afternoon of shooting, I had what I needed.

I told the farmer I'd hang around to take a few more photos while he was working, then hit the road. Heck, I had family expecting me that evening, so I couldn't hang around all night, right?

I didn't leave until the last light was gone.

That storm that had been on the horizon grew closer and closer; the dark sky set off the golden wheat even more. And the clouds were so cool, so textured. I often am more of a "shotgun" photographer than it seems like I should admit, which is to say I take a whole lot of photos to count on a few working out.

I took a lot that evening, every angle I could think of, every lens. I shot some with my iPhone and then some on my Nikon D810 DSLR. I filled a memory card. I crouched down in the wheat and shot up. I lined up the combine as it went back and forth. I set up a tripod and waited for lightning.

Stumbling onto a special scene like that, I was thrilled with the results. It's pretty cool that some contest judges were, as well.

My standard response since has been that I got lucky, and sure, that's the easy thing to say.

There's obviously more to it than that. Anyone standing there with a cellphone could have shot nearly the same photo, but there's something to be said for standing there, right?

Certainly, I've learned that while much of the challenge of good photography is being there for the "lucky" moment, even more important is being prepared for it: Have the right equipment, room on the camera's memory card and a charge in the battery.

Frankly, though, the "luck" in this situation didn't even have all that much to do with my preparation, that storm or that night.

I grew up helping out with wheat harvest. It was my favorite time of year on the farm, where long hours, family and a little financial incentive all mixed together in the perfect way. Often there was also such a perfectly beautiful backdrop.

I was lucky a storm came up that night, and lucky I was prepared to take a photo of it.

I was more lucky that, thanks to my time on the farm, I knew where to look for an incredible scene. 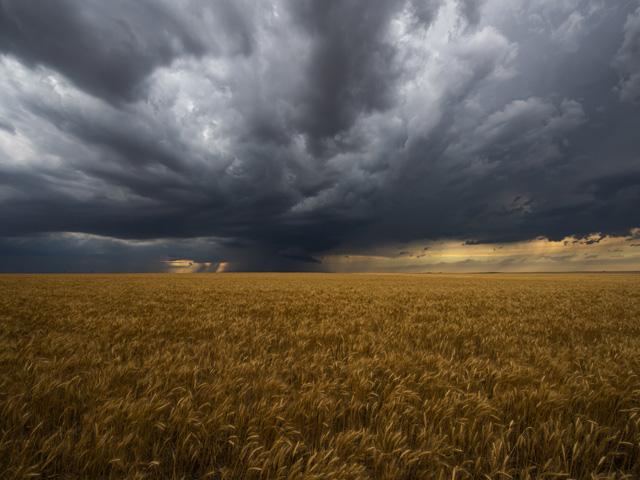