After more than 20 years in the same spot, DTN/Progressive Farmer recently moved to a new office building on the western edge of Omaha. It's a bit of a homecoming for me.

During my childhood, the area of our new building -- located at 18205 Capitol Avenue, near the corner of 180th and West Dodge Road in Omaha -- was all farmland. My family's farm was just a few miles to the northwest.

My dad farmed the land on the northeastern corner of the intersection in the early 1980s. Land on the southeast corner, where Village Pointe shopping center is today, was where I spent many hours on a neighbor's bean buggy spraying weeds in the late 1980s.

I also got to know the land well where our new office building sits on the southwest corner of the intersection. A neighbor who farmed that land used to come into town with his old Chevy pickup without a muffler, load up seven or eight teenage kids into the back of it, and then drive out to the fields where we would walk the crop rows, cutting weeds for hours.

There are no crops around here today -- just office buildings and a high-end shopping center.

My dad's family, Irish immigrants, settled near the small town of Elkhorn, Nebraska, about 20 miles west of downtown Omaha, in the 1870s.

My hometown was just a few hundred people up through the 1940s. Then, in the boom times after World War II, Omaha begin to push west. Rising off-farm incomes in the 1950s and 1960s pushed the demand for housing, and rolling farm fields became sub-divided neighborhoods, golf courses and strip malls.

By 1974, when I was born, Elkhorn's population was about 1,000 people and Omaha's western fringe crept closer. The amount of farmland between the big city and little town had shrunk to only about 10 miles.

My dad and uncle farmed various farms in this area during my childhood. To this day, we drive by developed areas of west Omaha and I say, "I can remember when they farmed this and that farm" and my kids look at me very strangely.

Omaha annexed Elkhorn in 2005, thanks to a Nebraska law which allows larger cities to take over smaller cities against their will.

With the farmland gone, most of the farmers I grew up with have sold out and retired or moved their operations somewhere else, including my own family. Two decades ago, we moved about 30 miles north to the farm where I live and commute from today.

I do find it ironic to now return to working on the land I knew so well, though today my corn knife is a computer and I'm creating agriculture news and feature articles instead of chopping weeds.

DTN is not the only agriculture-based business in the area. Lindsay Corporation, maker of center pivot irrigation systems, has new offices across the parking lot from us.

So, while this land isn't producing crops and livestock anymore, at least one corner of West Omaha still has an agricultural tie.

And today, with the temperatures outside hovering around 90 degrees, I'm thankful I will not be cutting down wild sunflowers the size of small trees. Oh, the days before Roundup. 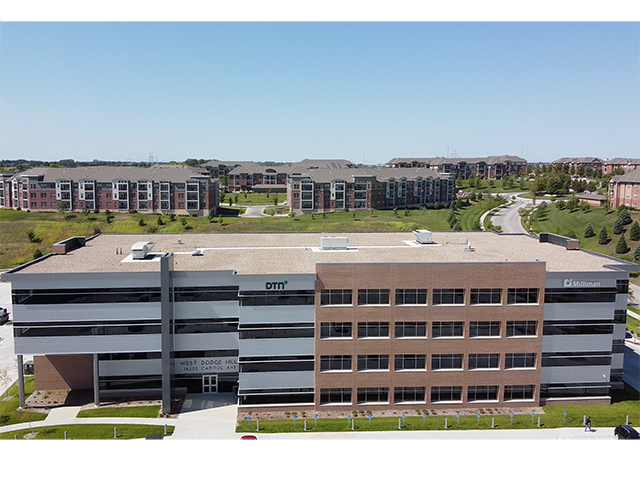 ken.boysen
9/18/2020 | 10:59 AM CDT
that is a pretty cool article . i can relate a little with your story . while I am not a farmer I did grow up close to this area and went to high school at Millard North ,,, which seems so far away now