Agriculture and Agri-Food Canada's first look at 2023-24 supply and demand for Canada's principal field crops involves a number of assumptions for the year ahead, with crop yield just one of many. Estimating yield for a crop that is months away from planting is a challenge, with factors such as soil moisture and forecast weather playing a role.

AAFC commentary, as it pertains to estimated yields, varies from crop to crop. In the case of durum, it is reported that yields are expected to improve. Commentary for barley, corn and wheat points to the potential for average yields, while trend yield is a measure used to describe the potential for other crops such as canola, soybeans and peas, although they do not specify the number of years used in the trend calculation.

The attached chart shows the comparison between AAFC's first yield estimates for the 2023-24 crop year (blue bars), the five-year average yield (brown bars) and the 20-year trend (grey bars). Of the principal field crops selected for this study, canola is the only crop where AAFC's January yield estimate fell below its five-year average, although only by 0.1 bushel/acre. Of the remaining six crops selected, the forecast yield for 2023 ranged from 0.3 bpa to 3.8 bpa (barley) higher than the five-year average (blue bars higher than brown bars).

Of the seven crops shown, the estimated yield for 2023 dry peas at 38 bpa is 3 bpa above average and 0.6 bpa above the 20-year trend, the only crop to be forecast at levels above these two measures.

At the same time, the estimated canola yield of 37.8 bpa is a modest 0.1 bpa below the five-year average and 3.4 bpa below the 20-year trend, also the only crop to show the current estimate to land below both average and trendline yield. 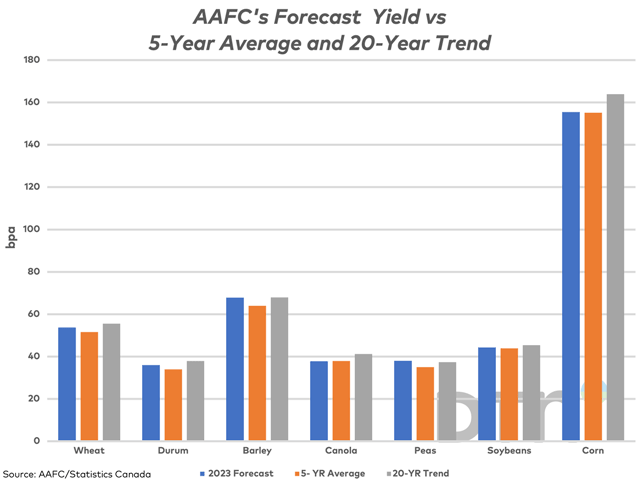