Earlier in the month, Statistics Canada's November estimates showed not only an upward revision in harvested acres, but also included a higher yield estimate for most provinces across the country. Statistics Canada estimates Canadian production of 5.226 million metric tons (mmt) up 86% from the historic low achieved in 2021 while 39% higher than the five-year average.

While there is a great deal of crop year left, AAFC's balance sheet includes an upward revision of 122,000 metric tons (mt) for domestic feed use, while leaving exports unchanged this month at 2.850 mmt.

This forecast has led to a sharp increase in forecast ending stocks to 1.150 mmt, as seen with the green bar on the attached chart. This volume is 262% higher than last year, 123% higher than the five-year average (blue line) and 78% higher than the 10-year average. When compared to historic July 31 stocks since 1980, as seen on the attached chart, this would be the fourth highest stocks seen over this period, although the spread between the second, third and fourth-highest is very narrow according to Statistics Canada estimates.

This marks the largest year-over-year change in the volume of oats carried out of the crop year as of July 31 (832,000 mt) as well as the largest percent increase seen in Statistics Canada data going back to 1980.

The stocks/use ratio calculated is 26% for the 2022-23 crop year, up sharply from 10% for the previous crop year while the highest calculated in seven years.

March oat futures continue to find support from the March contract low of $3.27 1/2/bu USD with a close of $3.36 1/2/bu on Dec. 20. Weekly CFTC data shows noncommercial traders increasing their bearish net-short position for a third consecutive week as of December 13 to a bearish net-short position of 996 contracts. While there is missing data, it appears that this is the largest bearish position held since October 2016, or more than six years.

At the same time, the March/May contract spread remains inverted, a sign of front-end commercial demand. This spread has strengthened in each of the past two sessions to 3/4 cents, holding in inverted territory for all but one day since Nov. 29. 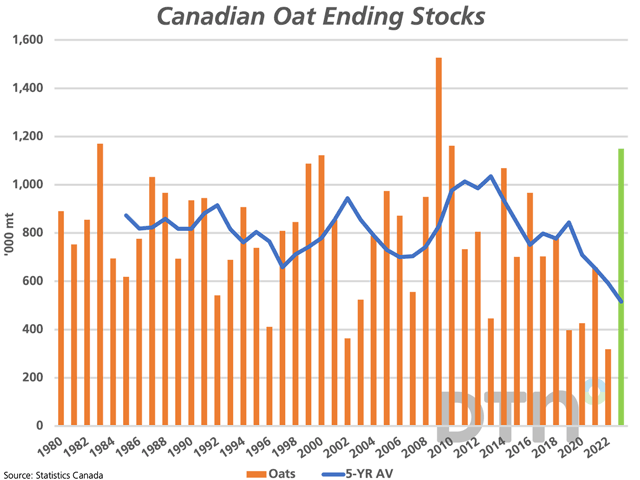