Statistics Canada's commentary points to a sharp rise in the exports of farm, fishing and intermediate food products, which rose 10.2% in October to a record $5.5 billion. A sharp rise in exports of canola and wheat were behind the results, which face both high demand and high prices.

The following is miscellaneous trade data as it pertains to select movement of grain and products.

Lentil exports were reported at 160,437 metric tons (mt), down from the previous month and the smallest October movement in three years. When measured in value, the largest sales were to India, Turkey and the United Arab Emirates. Cumulative exports during the first three months are seen at 554,446 mt, down 2.7% from the same period last crop year while 2.1% higher than the five-year average. Cumulative exports are close to being on the steady pace needed to reach the current 2.3 million metric ton (mmt) export forecast, although Statistics Canada's recent production estimate saw a lower revision of close to 500,000 mt which indicates the export forecast will be lowered as well.

Dry pea exports totaled 327,174 mt in October, the smallest volume shipped in three months. By value, 65.4% was shipped to China, while the next largest value of exports was shipped to Cuba at 7.6% of the total exported value. Cumulative exports are reported at 863,581 mt, 4.9% higher than one year ago while down 15.3% from the five-year average. Exports are well ahead of the pace needed to reach the current 2.5 mmt export forecast from Agriculture and Agri-Food Canada, which was revised 200,000 mt lower in November's report. Statistics Canada revised 2022 production 163,000 mt lower this month, but will result in reduced ending stocks rather than a reduction in exports.

Chickpea exports were seen at 18,391 mt, the largest October volume shipped in five years. The United States was the largest destination with 26.7% of the value exported shipped south, while Lebanon is the next largest at 12% of the value shipped. Over three months, 49,623 mt has been shipped, up 55.5% from last year and 72.9% higher than the five-year average. So far, 27.6% of the current 180,000 mt AAFC sales forecast has been achieved, which was revised 30,000 mt higher in November. Statistics Canada reduced the official production estimate by close to 29,000 mt this month, which may force demand to be rationed during the balance of the crop year.

Canary seed exports were seen at 12,504 mt in October, down from the previous month while in line with volumes shipped in October during the past two years. By value, 38% was shipped to Mexico with a further 9.9% shipped to Belgium. Over three months, 46,907 mt has been shipped, up 60% from the same period last year and 40.6% higher than the five-year average. To-date, 28.4% of the current AAFC export forecast of 165,000 mt has been achieved, a volume that was revised 20,000 mt higher in November, while still ahead of the steady pace needed to reach this volume. Statistics Canada's production estimate was close to unchanged this month, making the current export forecast achievable.

Mustard exports totaled 13,257 mt, the largest monthly volume shipped since May 2017. The largest exports by value were directed to the United States, or 52% of the total value, while next is the Netherlands at 12.5% of the value. Cumulative exports at 28,877 mt are up 21.3% from one year ago and up 9% from the five-year average. Exports have reached 26.3% of the 110,000 mt export forecast released by AAFC, ahead of the steady pace needed to reach this forecast. This month, Statistics Canada revised its forecast lower by roughly 15,000 mt, which should have no bearing on the current export forecast.

Cumulative exports over two months are down 36.4% from one year ago while down 23.4% from the five-year average. Cumulative exports of 685,652 mt have achieved 24.5% of the current AAFC forecast, ahead of the steady pace needed to reach this forecast. Statistics Canada increased its forecast for Canada's 2022 production by 37,551 mmt this month.

Corn exports in December totaled 19,901 mt, down from the previous month with exports off to a slow start in 2022-23. By value, close to 99% of the total value of exports was shipped to the U.S. this month. Total exports over two months are shown at 87,382 mt, down 2.2% from the same period last crop year and 3.2% higher than the five-year average. So far, 5% of the current 1.750 mmt AAFC export forecast has been achieved, currently behind the steady pace needed to reach this forecast.

Corn imports in October totaled 83,070 mt, the lowest monthly volume imported in 35 months or almost three years. Total imports during two months is reported at 184,645 mt, down 56.4% from the same period in 2021-22 while is 45.4% below the five-year average for this period. This is well-behind the steady pace needed to reach the 2 mmt import forecast released by AAFC in November.

Canola oil exports totaled 274,419 mt in October, the highest monthly volume shipped in 15 months. During three months, exports total 664,223 mt, up 3.1% from the same period last crop year and down 12.3% from the three-year average.

Canola meal exports are seen at 421,245 mt in October, down slightly from the previous month. Over three months, exports have totaled 1.249 mmt, up 8% from the same period last year and 4% higher than the three-year average.

This year's Ag Summit will be held virtually on the mornings of Dec. 12-13, so you can join from the comfort of your own home. Further details can be found at http://www.dtn.com/…. 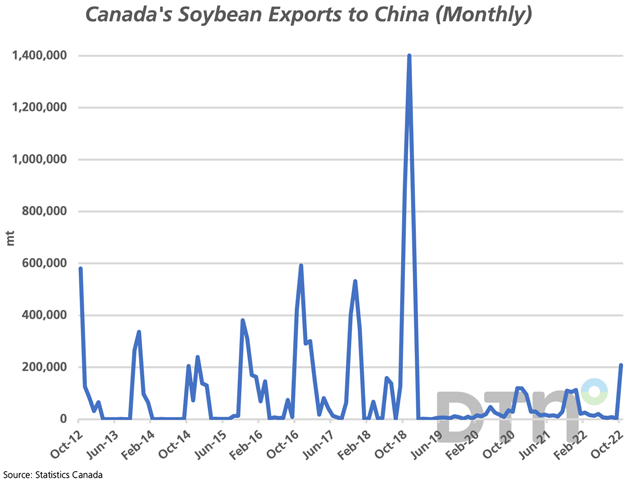