Huge licensed wheat shipments (excluding durum) over the past three weeks (week 8-10) totaling 1.6 million metric tons (mmt) have seen the cumulative jump ahead of the five-year average over the first 10 weeks of the crop year. Over 10 weeks or 19.2% of the crop year, the Canadian Grain Commission reports 3.3368 mmt exported, which is up 24.6% from the same period in 2021-22 and is 2.8% higher than the five-year average.

Weekly statistics show commercial stocks of wheat at 3.0564 mmt as of week 10, which is the highest stocks reported for this week in five years, up 13.8% from one year ago and 13.9% higher than the five-year average. This could signal that demand is expected to remain firm moving forward, although the location of the stocks may be a concern. Week 10 data shows 57.7% of commercial stocks are located in the country in primary elevators, which compares to 50.6% last year and the five-year average of 49.2%. Disappointing rail movement in recent weeks is a definite factor behind this data.

Over the past five years, exports through licensed facilities accounted for 18.4% of total crop year exports as of week 10, while projected forward, this would indicate crop-year exports of 18.135 mmt, close to the 18.2 mmt forecast released by AAFC in September, which may be revised when the next report is released on Oct. 21.

It is interesting to note that if the data from the drought-reduced crop in 2021 is eliminated, two of the remaining four years of the past five show that 16.5% of crop-year exports were achieved as of week 10, a pace that would project forward to an even higher forecast of 20.2 mmt, excluding durum exports.

This week's October USDA WASDE report would indicate U.S. analysts hold even higher hopes for Canada's wheat exports. The report shows all-wheat exports estimated at 26 mmt, or 2.8 mmt higher, than the September AAFC estimate, which was released in mid-September, or almost a month earlier. If you subtract the AAFC's durum export forecast of 5 mmt, this would indicate wheat exports (excluding durum) would have to reach a record 21 mmt. 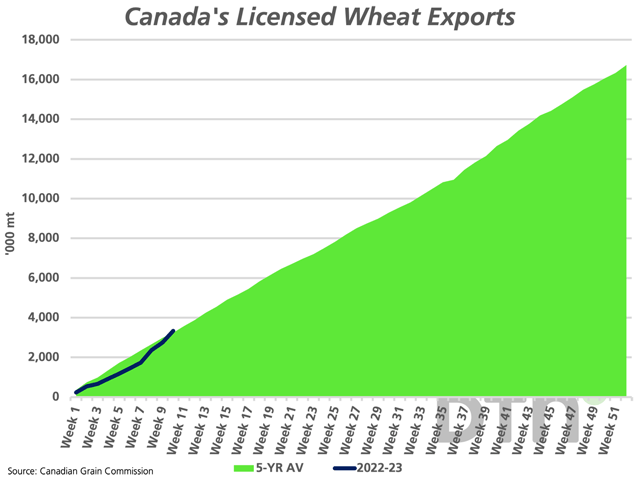