The Aug. 29 Statistics Canada grain production estimates were based on July model-based findings, while this report will be followed by a second release of estimates on Sept. 14, based on the August model results. This year marks the third consecutive year that model-based results have been used to compile both the August and September reports, while the final report released in December will be based on producer surveys.

Today's report found significantly higher production potential for most crops in 2022, while also included some upward adjustments to some crops produced in 2020 and 2021.

At the same time, this report did not take into account the hot and dry conditions hitting the western Prairies in August, which may have taken a further toll on many crops. The last week has seen industry criticism over the lag time involved in the release of today's report, which will be cut close to 50% when the August model data is released on Sept. 14.

Canada's all-wheat production is forecast to increase by 55.1% to 34.6 million metric tons, falling in the upper end of the range of pre-report estimates that ranged from 31.6 mmt to 35 mmt. This is up 13.5% from the five-year average, while there was an 898,200 mt addition made to the all-wheat production forecasts for the past two crop years.

Spring wheat production is forecast to hit 25.6 mmt, up 57.3% from last year and 11.7% higher than the five-year average. In addition, 492,180 mt of spring wheat was added to the estimates for the previous crop years. Across the three prairie provinces, harvested acres are forecast to increase from 8.7% in Alberta, to 17.2% in Saskatchewan, or 12.4% overall, while average yield is forecast to increase by 20.9% in Manitoba, to 59.4% in Alberta, or 39.8% from 2021 overall. The average yield forecast for Alberta at 58.5 bushels per acre compares to the Alberta government's estimated dryland yield estimate of 53.2 bpa, as of Aug. 23, which bears watching.

Durum production is forecast to rise by 113% overall to 6.473 mmt, the upper end of pre-report estimates and a volume 29.5% higher than the five-year average. In addition, 383,994 mt was added to the 2021 production estimate. The durum forecast may be one that will see a lower revision following the release of the September report, with the dry conditions for western growing areas in August taking a toll. This notion is supported by the most recent Alberta crop report, where the Alberta government rated the durum crop at 45.5% good-to-excellent as of Aug. 23, while Statistics Canada estimated yield for the province at 48.7 bpa. This yield is close to the 48.5 bpa yield achieved in 2020, when the durum crop was rated 88.5% G/E as of Aug. 25, or 43 points higher than the current estimate.

Canola production was estimated at 19.5 mmt, which fell in the range of pre-report estimates from 18.6 mmt to 20.3 mmt, which is 41.7% higher than last year and 3.5% higher than the five-year average. In addition, prior year adjustments for the 2021-22 crop year saw close to 1.2 mmt added to the balance sheet. While the harvested area across the Prairies is forecast to fall by 4.1% overall, including a roughly 3-5% drop across the three provinces, average yield is forecast to increase by 31.5% in Manitoba, 50.8% in Saskatchewan and 53.3% in Alberta. The estimated yield for Alberta at 44.3 bpa is well-above the province's dryland yield estimate of 40.5 bpa as of Aug. 23, which may support the idea of a lower revision in this estimate when Statistics Canada reports on Sept. 14 due to hot and dry August conditions.

Pulse crop estimates (peas and lentils) came in higher than pre-report estimates. The lentil estimate was released at 2.906 mmt, up 80.9% from last year and 25.2% higher than the five-year average. This was higher than the range of pre-report estimates from 2.4 mmt to 2.8 mmt, although reports from the field note varying results based on the amount of precipitation received. The dry pea forecast came in at 3.61 mmt, up 59.9% from last year and 3.9% below the five-year average. This also came in above the range of pre-reports estimates, seen from 3.4 mmt to 3.450 mmt.

Statistics Canada estimated Canada's corn crop at a record 14.825 mmt, which would be up 6% from 2021 and 7.5% higher than the five-year average. This was above the range of pre-report estimates, which were shown from 14 to 14.2 mmt. Harvested acres are estimated to climb 3.6% in 2022, with an increase seen in Quebec (0.6%), Ontario (5%) and Manitoba (4.7%). Yield is forecast to rise by 2.3% overall to 163.9 bpa, with a 3.5% increase forecast for Quebec, a 1.5% drop forecast for Ontario and a significant 38.1% increase seen for Manitoba. While a record crop is forecast for both Ontario and Manitoba, hot and dry conditions for southern Ontario, where an estimated two-thirds of production is found, may have since curbed the crop's potential.

Soybean production was estimated at 6.382 mmt, up 1.8% from last year and down 5.9% from the five-year average. This is just slightly higher than shown in the range of pre-report estimates. While harvested acres are forecast down overall (1.7%) from the previous crop year, largely due to a 14.3% drop in Manitoba's acres. The National yield is forecast to climb by 3.7% from 2021, with a 0.5% increase seen for Quebec, a 5% drop for Ontario and a 32.5% increase forecast for Manitoba. Dry conditions seen for Ontario in August will likely weigh further on the crop's potential, which may be captured when the Sept. 14 report is released based on the August model findings. 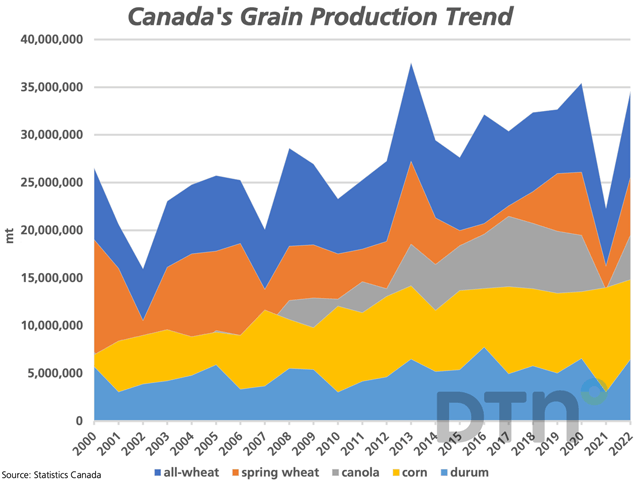