As seen in Saskatchewan Agriculture's weekly Crop Report, as of Aug. 22, hot and dry weather has led to rapid harvest progress during the past week in the southern and western side of the province, while the eastern side saw a slower pace of activity as showers slowed crop maturity and harvest progress.

An estimated 45% of the Southeast Region is harvested as of Aug. 22, up 28 percentage points from the previous week. An estimated 19% of the West-Central Region is harvested, up 11 points over the previous week. The percentage of the Southeast Region viewed as harvested is at 6%, up four points, and the estimate for the East-Central Region increased three points during the week to 4% complete. The estimates for the Northeast and Northwest Regions increased by one point to 1% complete as of Aug. 22.

Hotter and drier conditions will benefit the eastern side of the province, while this is exactly what is seen in the current forecast, with daytime highs during the next five days reaching 4-9 degrees Celsius above normal.

At the same time the 2021 crop matured quickly due to heat and drought, while allowed for faster progress while in the field due to sharply lower yields. When current progress is compared to the five-year average from 2016-20, as shown by the grey bars on the attached chart, we see that the total progress of 16% is ahead of the 2016-20 average of 12%. Given this comparison, the current progress for both winter wheat and dry peas would trail the average pace over 2016-20, while progress across all other selected crops would be ahead of the average pace for the five years. 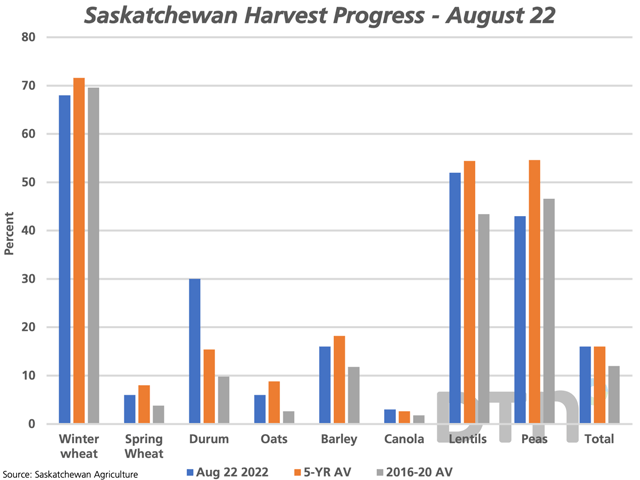