As seen on the attached chart, the largest production revision was seen in estimates for durum, with the production estimate revised 786,000 metric tons higher to 6.265 million metric tons, while ending stocks were revised 200,000 mt higher to 900,000 mt.

AAFC increased its estimated durum yield from 34.2 bushels per acre to 39 bpa. This yield is well-above the 18.3 bpa average estimated for 2021, while the 2016-20 average, which excludes the drought-reduced yield from 2021, is 40.3 bpa. Note that this yield estimate is despite the Aug. 9 crop condition for Alberta at 46.2% Good to Excellent, while the Saskatchewan Crop Report as of August 15 describes the Southwest Region and the West-Central Region facing the potential for below to well-below average yields for crops in general. Estimated durum production of 6.265 mmt would be 136% higher than realized in 2021.

Another interesting adjustment was made for 2021-22 durum, resulting in a modest 46,000 mt increase in ending stocks to 496,000 mt. An adjustment was required as the week 52 commercial stocks are reported at a level which is close to AAFC's July estimate for total stocks. At the same time, this revision was made possible by a downward revision of the feed, waste and dockage estimate to a negative 97,000 mt, which stands out on the report as one of three revisions into negative territory, which also saw domestic use of both 2021-22 mustard and canary seed revised lower and to a negative volume.

Another interesting adjustment this month is a 2 mmt increase in estimated corn imports to 6.4 mmt. As of June's official Statistics Canada merchandise trade data, corn imports totaled 5.387 mmt, with 531,677 mt imported in the month of June. This pace of movement has been evident in official data, yet the revision to the supply and demand tables was slow to appear. 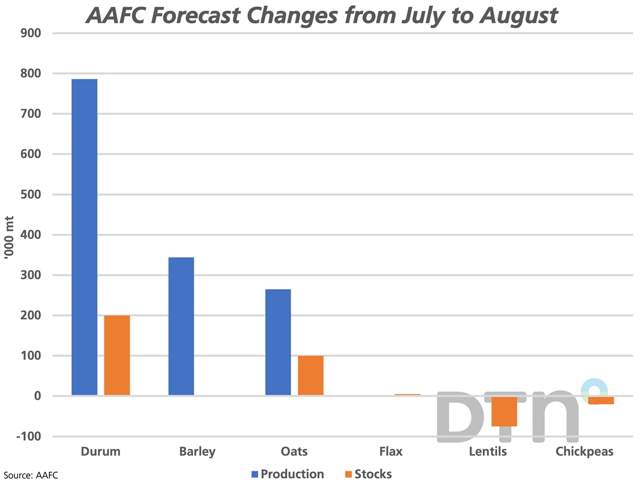