As of week 19, licensed exports totaled 4.519 mmt of wheat through licensed facilities (excluding durum), which is roughly 596,000 mt behind the steady pace needed to reach the revised forecast, although this does not include the export of flour and unlicensed exports.

The other major revision was seen for durum, where production was revised sharply lower (891,000 mt) in Statistics Canada's Dec. 3 release. As a result, exports were revised lower by 800,000 mt to 2.3 mmt, with a small downward revision seen in domestic use needed to keep ending stocks unchanged this month at 450,000 mt. As of week 19, cumulative exports of 1.123 mmt have reached 49% of this forecast and are close to 283,000 mt ahead of the steady pace needed to reach this forecast. Exports will need to slow drastically to reach this forecast; Algeria is currently in the market for durum, and it will be interesting to see who can supply this.

It should be noted that AAFC's revisions from November to December resulted in a 200,000 mt increase in all-wheat exports to 16.3 mmt, which is 1.3 mmt higher than the 15 mmt released by the USDA this month.

An interesting revision was seen for soybeans. Statistics Canada's November estimate resulted in a 386,000 mt increase in soybean production to 6.272 mmt, which is down only 1.4% from 2020, although the upward revision in exports was only 200,000 mt, with ending stocks also increased by 200,000 mt. As is also feared in the U.S., the window of opportunity is slowly closing with new-crop product in Brazil just around the corner. As of week 19, exports from licensed facilities are shown at 1.941 mmt, down 23.3% from the same period last crop year.

Production for canola was revised 187,000 mt lower this month, while exports were revised by a modest 100,000 mt lower to 5.4 mmt. As of week 19, cumulative exports of 2.613 mmt are 640,000 mt ahead of the steady pace needed to reach the revised forecast, suggesting that the pace of exports will be forced to taper soon if current estimates are correct. 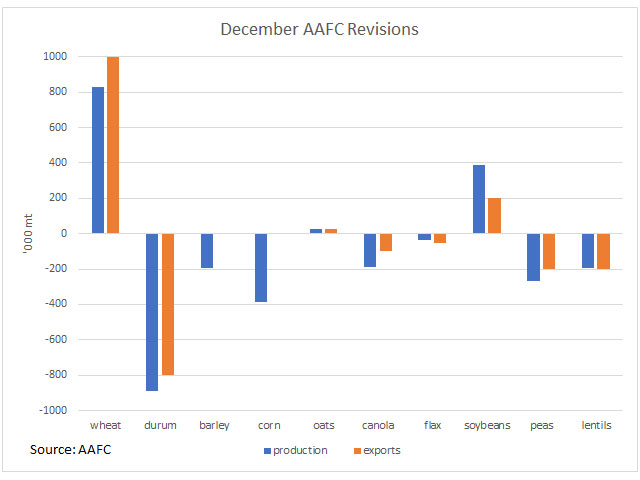