The Canadian Grain Commission's Exports of Canadian Grain and Wheat Flour report shows total crop exports through licensed terminals during the first two months of the crop year (August and September) at 5.0589 million metric tons, down 34.4% from the same period in 2020-21 and 24.7% below the three-year average. Agriculture and Agri-Food Canada's October supply and demand tables point to a 35.4% drop in exports forecast for 2021-22, while considering both licensed and unlicensed exports and the export of crop products.

The attached chart shows the change in cumulative licensed exports for select crops from 2020-21 to 2021-22 to the largest destinations for the months of August and September. As seen in this data, the only year-over-year increases are seen in durum exports to Morocco, barley exports to China and bulk lentils to India. Here are some take-aways from this data:

1) The bulk lentil exports to India of 58,500 mt during the first two months, represent 28.6% of the licensed volume exported, although it is important to note that a more complete picture will be available when Statistics Canada releases its Merchandise trade report for September on Nov. 4. In 2020-21, the Canadian Grain Commission reports 1.1861 mmt of lentils shipped through licensed facilities, which represents 51% of the total volume exported, as indicated by Statistics Canada data. Due to the cost and low supply of containers, there will be a push to increase bulk movement in 2021-22.

2) Of the licensed exports of barley during the first two months of the crop year reported by the CGC, 98.6% has been shipped to China while the balance has been shipped to the United States. Exports to China are up 15% from the same period last crop year, while the overall movement of barley is brisk and points to extremely tight supplies well-ahead of the end of the crop year, or July 31.

3) Wheat demand varies significantly across Canada's largest buyers from 2020-21. For example, shipments to China are down 50.1% from last year and shipments to Peru are down 36.7%, while Indonesia is down only 6.4% and Japan is down only 8.2% from the same two months last crop year.

4) Despite the rapid movement of barley to China, Chinese buying lags across several markets, which is consistent with U.S. trade. Wheat movement to China is down 50%, movement of canola is down 60% and exports of peas are down 31%.

5) An increase in movement of durum to Morocco bears watching. Earlier this month, a USDA attache report estimated Morocco's total wheat production at 7.540 mmt, up from 2.560 mmt in 2020-21, a record crop for the country. Imports of all-wheat are estimated at 4.5 mmt, down 700,000 mt from last crop year. This week's reports point to Morocco eliminating import duties on soft wheat and durum, making imports increasingly competitive. 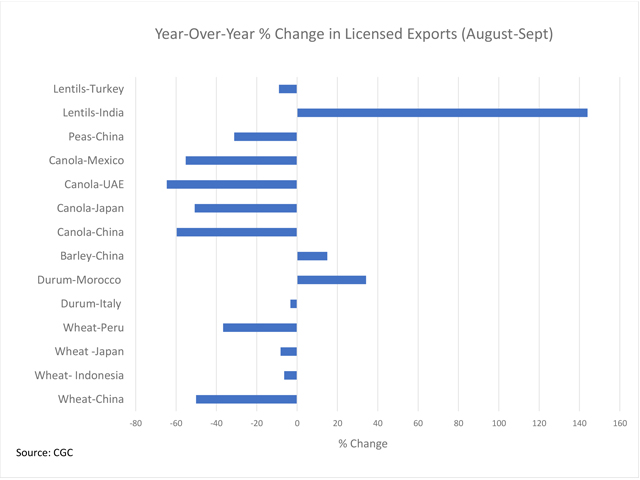