In week 45, or the week ending June 10, 1.3074 million metric tons of grains monitored by the Canadian Grain Commission were delivered into the licensed handing system, the largest volume delivered in 36 weeks or since the month of October. This is up for the third straight week as producers have finished spring seeding and showers have led to improved growing conditions over some areas of the Prairies. Weekly deliveries for this week were the highest seen in four years and 14.8% higher than the five-year average.

Cumulative deliveries total 47.693 mmt, down 3.7% from the same 45-week period in 2017/18, although 7.5% higher than the five-year average of 44.381 mmt. Elevator space on the Prairies is still viewed as good, with week 45 primary elevator stocks reported at 2.776 mmt as of week 45 or June 10, which represents just 57.7% of the estimated working space on the Prairies as estimated by Quorum Corp. This varies widely across the Prairies, with Manitoba's stocks accounting for 62% of working capacity, Saskatchewan at 50.9% and Alberta at 67.4%.

Given individual selected grains, we see on the attached chart that cumulative deliveries of oats, barley and soybeans are ahead of both 2016/17 and the five-year average in terms of volumes delivered into licensed handing facilities. Of the crops selected, exports of durum and lentils are the only two crops where volumes delivered trail both the same period in 2016/17 and the five-year average, which is closely tied to trade disruptions with Italy in durum and India in lentils.

Looking at the larger crops of wheat and canola, producers have delivered 15.824 mmt of wheat as of week 45, which is ahead of this time last crop year but behind the five-year average of 16.393 mmt. Producers have also delivered 16.686 mmt of canola into licensed grain handlers as of week 45, which is down 3.5% from the same period last crop year although 15.5% higher than the five-year average.

Over the past five-years, an average ranging from 85.2% of crop year wheat deliveries have been completed as of week 45 to an average of 95% of the crop year's dry pea deliveries. This calculated historical pace would point to the potential for an additional 2.750 mmt of wheat and 2.359 mmt of canola to be delivered in the final weeks of this crop year, while buyers may be less apt to chase after pea deliveries into the summer in advance of new crop. Activity over the upcoming weeks will signal whether the discovery of GMO wheat seed in southern Alberta has a bearing on overall movement, while the escalation in trade tensions between the United States and China could have a positive spillover effect on the canola market and bears watching.

This week's blog asks what you think about current soil moisture conditions. Too much rain? Still too little? You can weigh in with your thoughts on this week's poll, found at the lower right side of your DTN Canada Home Page. We thank you for your participation! 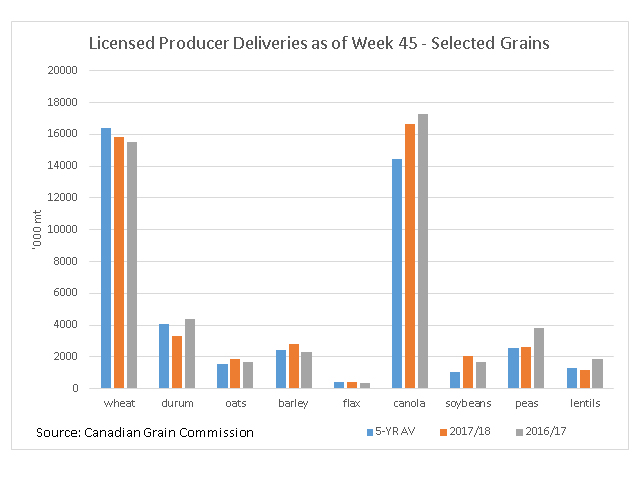