As of week 32, or the week ending March 11, Canada's licensed wheat exports (excluding durum) totaled 9.323 million metric tons. This volume is 14.3% higher than the same week in 2016/17 and 1.2% higher than the five-year average for this week. Over the past five years, an average of 54% of crop year exports have been made through licensed channels as of week 32, or the first 61.5% of the crop year. Based on this historical pace of movement, crop year exports would project to 17.270 mmt, just slightly higher than the 17.2 mmt export target released by AAFC in February. AAFC's March supply and demand tables should be available any day, although wheat exports may be left unchanged.

As of this same week, durum exports totaled 2.496 mmt, 2.1% below the same week last year and 12.9% below the five-year average. Over the past five years, an average of 61% of crop year exports were reported as of week 32, which projects to crop year exports of 4.1 mmt, well-below the current 4.6 mmt estimate last released by AAFC and is one number that could be trimmed in the March estimates.

Projections for both canola and soybean exports lag the pace needed to reach current AAFC export demand estimates. Canola exports through licensed facilities as of March 11 total 6.423 mmt, down 2.6% from 2016/17 and 19.3% higher than the five-year average. Over the past five years, an average 57.7% of crop year exports were achieved by week 32, which projects to crop year exports of 11.1 mmt, down from the current 11.5 mmt AAFC estimate.

Soybean exports through licensed facilities totaled 3.068 mmt as of week 32, down 10.4% from the same week last crop year and 13.3% higher than the five-year average. Over the past four years, an average of 67.7% of crop year exports were realized as of week 32 through licensed channels, which projects to crop year exports of 4.5 mmt as compared to the 5.6 mmt export estimate shown by AAFC.

Based on the historical pace of movement as of week 32, projections would suggest that both oats and barley exports will meet or exceed current AAFC estimates. Projections fall short of meeting current crop year estimates for the export of dry peas and lentils, based on the current and historical pace of bulk deliveries into the licensed handling system. 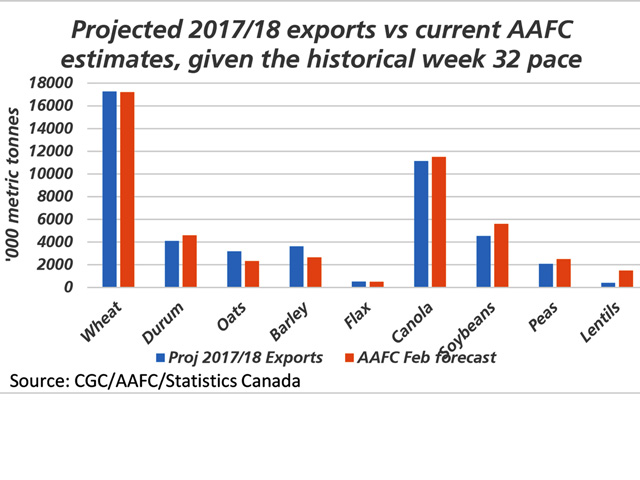