Canada's trade surplus with the world was up from December at $806.9 billion in January, the third straight month of a reported trade surplus and the longest stretch of trade surpluses since eight consecutive months ended in September 2014. Exports rose .5% in January from the previous month to $46.450 billion, a record for monthly shipments. Statistics Canada commentary pointed to increased movement of vehicles and parts along with agriculture trade, with increased movement of canola to China noted.

The broad category of Farm, fishing and intermediate food products shows exports reaching a record $3.082 billion in January. The narrower Farm and fishing category also shows a record monthly movement of $2.476 billion, while canola exports received recognition in Statistics Canada commentary with a record $844.5 million shipped in January, up 83% from January 2016. The previous monthly record was $650.5 million in August 2014.

Here is a look at selected export data from today's report:

Lentil exports were 243,258 metric tons in January, a record set for this month, but the lowest monthly movement in five months. Year-to-date exports total 1.681 million metric tons, down 1.7% from last year but 67.3% higher than the five-year average. Given the recent AAFC revision in 2016/17 exports from 2 mmt to 2.2 mmt, exports as of January represent 76.4% of the estimate for the crop-year for the first 50% of the crop year, well-ahead of the pace needed to reach the target. India was the largest recipient of Canadian lentils over the month although at 73,511 mt is just slightly below the volume shipped in December and is below the four-month average of 119,500 mt.

January chickpea exports were reported at 13,367 mt, the largest monthly movement seen since last June and likely a record for January movement. Year-to-date, 55,816 mt has been shipped, 80% of volume shipped in the same period in 2015/16, but 165% of the five-year average. Recent AAFC estimates boosted the potential movement by 20,000 mt to 115,000 mt in the February supply and demand estimates, with 48.5% of the total realized in the first 50% of the crop year, indicating exports on track to reach the target.

The report said 219,686 mt of dry peas were shipped in January, the second-lowest monthly volume shipped this crop year, but still the largest January movement seen in six years. Year-to-date, 2.212 mmt has been shipped, 116.9% of the same period in 2015/16 and 145.8% of the five-year average. Given the current crop-year estimate for exports at 3.2 mmt, the current volume shipped is 69.1% of the target in the first 50% of the crop year, well-ahead of the expected pace. India was the largest buyer ahead of their Rabi crop harvest, with 121,504 mt shipped to that country although was well-below the four-month average of 187,000 mt per month.

Canary seed exports were at 11,307 mt in January, the second highest monthly volume shipped this crop year. As seen on the attached chart, canary seed exports continue to lag, at 88.5% of the 2015/16 volume and 89.2% of the five-year average. In the first six months of this crop year, 66,555 mt have been shipped, which represents 57.9% of the annual target and suggests that exports are ahead of the pace needed to reach the target given January data.

January mustard exports totaled 8,305 mt, up from the weak volume shipped in December. Year-to-date, 57,141 mt has been shipped, equal to the volume shipped in this period in 2015/16 while is 94% of the five-year average. Current movement totals 49.7% of the 115,000 mt target set by AAFC for the crop year, suggesting that exports are on track to achieve the target.

Flax exports in January totaled 61,830 mt, a five-month high but well-below the volume shipped in this month in 2015/16. Over the first six months of this crop year, 283,503 mt has been shipped, which reflects 90.6% of the same period last crop year and 104.6% of the five-year average. The current AAFC estimate for 2016/17 exports is 600,000 mt, with current volumes at 47.3% of the crop year target, close to the necessary pace needed to reach this volume. China was the largest buyer in January, taking 53,274 mt or 86% of the January exports and the largest monthly volume moved to that country since March 2016.

Soybean exports in January, the fifth month of the row-crop crop-year, totaled 444,718 mt, a four-month low but the largest January volume ever shipped. Year-to-date, 3.278 mmt has been shipped, 108% of the same period last crop year and 132.7% of the five-year average. In the first 42% of the crop year, 74.5% of the 4.4 mmt export target has been shipped, with cumulative movement well-ahead of the pace needed to reach this target. 67.6% of the January volume was shipped to China, while in the first five months of this crop year, China has been shipped 49.3% of Canada's soybean exports.

What do you believe will be the biggest shift in seeded acres seen in your area in 2017? You can weigh in with your thoughts on this week's poll, which is found at the lower right side of your DTN Homepage. 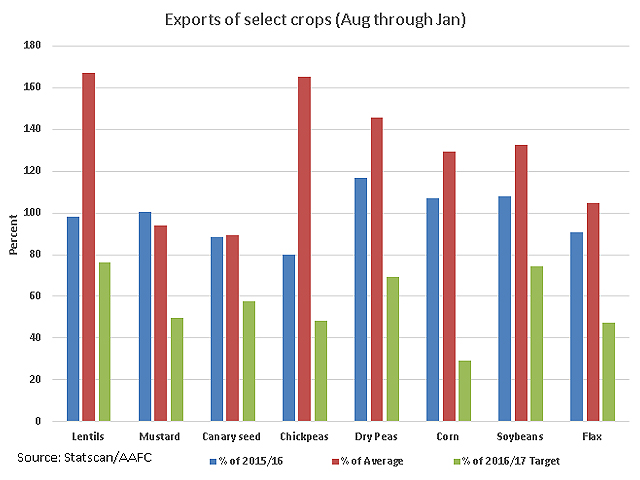