In January, DTN Contributing Analyst Joe Karlin studied the soybean/corn ratio and its impact on spring planting intentions. At the time, Karlin viewed the ratio as "lofty" and explained, "A high soybean-corn ratio often signals to market participants, including farmers and traders, the need to plant soybeans as opposed to corn to take advantage of the high ratio." DTN research has signaled that November 2017 soybeans averaged $10.19/bushel over the month of February, much higher than the $8.85/bu. reported for the same month in 2016. At the same time, the February average for corn is calculated at $3.96/bu., up just $.10 from last year.

When the soybean price is considered relative to corn, we see that today's March 1 ratio of November 2017 soybean futures to December 2017 corn futures works out to 2.57. This is above the 10-year average of 2.29 for this date and going back in time, is the highest ratio calculated for this date since March 1, 1989.

Given this, how will Canadian producers react? Early estimates from Agriculture and Agri-Food Canada point to an overall increase in seeded acres of 10% from 2016 to a record 6 million acres. As seen on the attached graphic, there were four years out of the last 10 (2007 through 2016) which saw a year-over-year increase in acres for all three major producing provinces of Quebec, Ontario and Manitoba. These were seen in 2009, 2010, 2013 and 2014.

When considering these four years, the correlation to the March 1 bean/corn ratio is not so clear. Canada experienced a year-over-year increase in soybean acres planted of 18.4% in 2009, when the March 1 new-crop bean/corn ratio was 2.12, the second lowest for this date of the 10 years in question. The following year, the ratio was calculated at 2.32 on March 1, which led to a 6.3% increase in planted acres.

Also of interest is the link between estimates released early in the year when compared to the final seeded acres (not shown). In readily available Statistics Canada data going back to 2009, the March planting intentions data based on farm surveys and released late April understated actual acres planted in each year. The largest miss over this period was seen in 2013, when actual acres planted were close to 325,000 acres higher than the March Statistics Canada estimates. The five-year average results in actual planted acres being 160,000 acres higher than the earliest Statistics Canada estimates.

What shifts in seeded acres do you think the industry will most likely face in 2017? You can share your thoughts on the latest poll, found at the lower right side of your DTN Homepage. 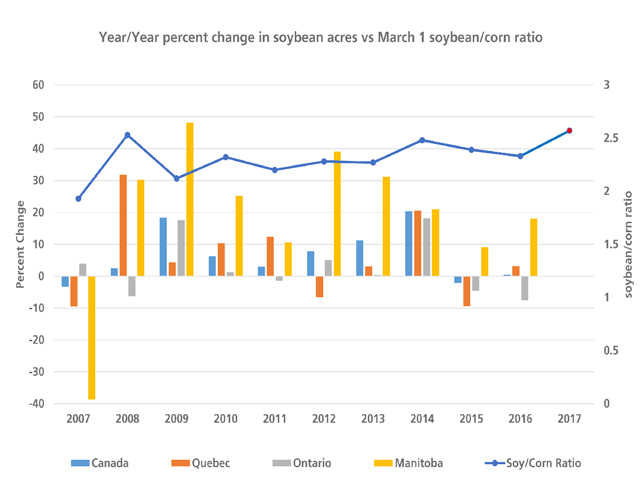