DTN's 360 polls give readers the chance to share their thoughts on a variety of topics throughout the year. Here is a look at some of the recent results:

Question: What best describes what you think we can look forward to in row-crop prices (soybeans and corn) over the balance of the crop year?

One interesting point in the responses to this question is that everyone had an opinion, for as seen on the attached graphic, no one chose the "Undecided" option. This question resulted in two of the five selections receiving the most weighting, with 31% of respondents feeling that the pace of North American exports would help boost prices to higher levels, while 56% of respondents indicated that South American prospects would be the deciding factor.

Indeed, South American weather is dead-center on the radar for global grain market watchers. DTN forecasts show Brazil's weather generally favourable for crop development, although there is some chatter about dryness in the northeast areas of the country over the next several days. Once again, estimates are pointing to the potential for yet another record crop of soybeans in Brazil of up to 106 million metric tons. Argentina's weather has also been under scrutiny, with a hot and dry weather pattern giving way to the potential for excessive rains and flooding in certain areas over the upcoming weekend.

Question: Statistics Canada released its final production estimates for 2016 under challenging circumstances, with harvest still ongoing during the survey period. What crop do you feel will see the largest future revisions to estimated production?

Prior to the final Statistics Canada estimates released in early December, pre-report trade estimates indicated that canola production would range between 18 mmt and 19.6 mmt, while the final estimate came in closer to the lower-end at 18.4 mmt. There are still trade participants indicating that further revisions are yet to come.

Question: What do you think of Statistics Canada's release of the traditional survey-based crop estimates, as well as model-based production estimates just weeks apart?

Question: Canada's federal government has announced a new carbon tax plan, which in some cases will run in tandem with existing provincial initiatives. What do you think of the plan?

Farmers, farm groups and various politicians are pointing to concerns of the pending tax scheme which is viewed to make high carbon intensity industries such as agriculture, less competitive with U.S. and global competitors.

Question: Given the costs and benefits of storing grain, what crop do you think will give the best financial return by storing in the 2016/17 crop year?

While there was small interest shown in storing both wheat and durum this crop year in this survey, the oilseeds received the overwhelming majority of the choices selected by this poll's respondents. A total of 12% of respondents selected soybeans, while 62% of respondents chose canola as the crop offering the best returns by storing.

While the carry in the canola market has weakened over the course of this week, suggesting a slightly less-bearish approach to trade by commercial traders, basis on the front months is also significantly weaker than the deferred months, discriminating against spot deliveries while promoting opportunities for grain stored.

Question: What concerns you most surrounding issues that Canada may face with the new United States administration over the next four years?

Two of the five selections received the bulk of the weighting of responses. A total of 55% of respondents chose Protectionist policies, including the U.S. approach to trade deals such as NAFTA and TPP; 36% of the respondents chose the potential impact to markets and currencies. A much lower number of respondents, or 9% in total, picked the selection "Other."

Farmers on both sides of the border are showing concerns surrounding the new administration's approach to issues such as trade, the environment, and entitlements.

This week's poll asks what percentage of your 2016 production has been priced. You can respond to this poll which is found at the lower-right side of your DTN Home Page. We thank you for your input for the polls discussed, along with all future polls! 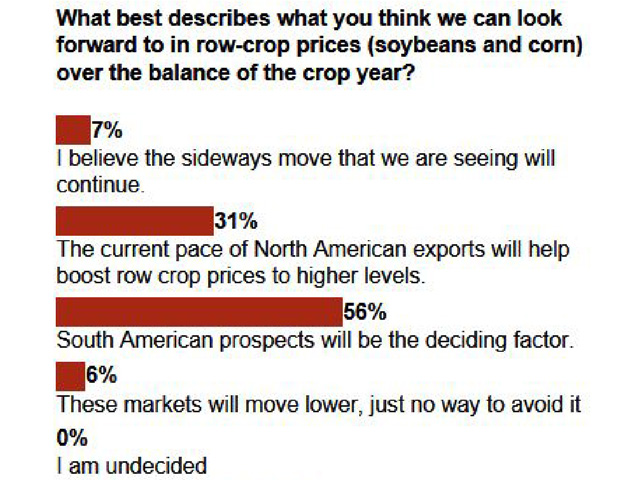