Prairie canola pricing was split between the January and March contracts on Tuesday, while one area of consensus is the lack of interest in fresh, front-end deliveries. The average December basis, calculated at $39.73 per metric ton under the March future, is the weakest basis level calculated against any month since Sept. 1, when prices typically face pressure from harvest. Today's basis levels, based on accessible internet bids, range from as narrow as $16.90/mt under the March at an eastern prairie point to as weak as $63/mt under the March at a western crusher.

This time last year, the basis was calculated at $33.59/mt under the March, while the three-year average for this period is $36.72/mt under, although is skewed by the excessively weak basis experienced in 2013, given record production and a lack of movement.

Despite strong demand seen from both the export and crusher sides of the business, producer deliveries continue to leave the market well-supplied. As of week 19 data, covering the week ending Dec. 11, producers had delivered 7.648 million metric tons of canola into the licensed system, which is 12.6% higher than the same period last year and 25% higher than the five-year average. Week 19 deliveries dipped below 400,000 mt to 397,200 mt, the first time in four weeks that deliveries were lower than the previous four-week moving average.

While May might not be an opportune time for many to sell, due to spring seeding, potential road bans and other seasonal challenges, today's basis calculations points to a $16.87/mt improvement between the spot December basis and the May delivery basis, while the May closed at a $4.70/mt premium or carry to the March, for an overall improvement of $21.57/mt or $.49/bushel.

Despite today's weak close in soybeans, the March canola future remained consolidated within last week's trading range. A move below $520.50/mt, last week's low, would result in the lowest level reached in over four weeks and could result in a move to retracement support at $512.90/mt. At the same time, DTN's Five-Year Seasonal Index points to canola entering into a period of seasonal strength in December which lasts until late June or early July.

This week's poll asks what percentage of your 2016 production has been priced. You can respond to this poll which is found at the lower-right side of your DTN Home Page. We thank you for your input! 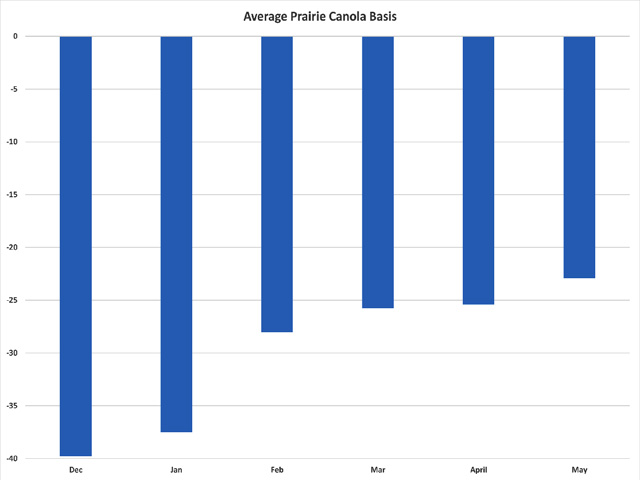