Forecasts by the USDA point to an expected year-over-year increase in all-wheat sales of 26% to 975 million bushels (26.5 million metric tons). Earlier in the week, we saw the most recent export inspection data show that year-to-date volumes inspected are 29% above last year's pace and viewed as bullish for U.S. wheat. Friday's U.S. Weekly Export Sales Report was viewed as neutral for wheat, with sales above the weekly volume needed to reach the 2016/17 target, while actual shipments were below the volume needed this week to reach the target.

Despite the weaker Canadian dollar trade, Canadian wheat exports continue to lag. This could be largely tied to the late harvest along with quality concerns tied to the challenging growing season and harvest. As of week 16, or the week ending Nov. 20, exports of wheat from licensed facilities (excluding durum) total 4.3649 million metric tons, which is 22% below the same period last year and 10% below the five-year average. Durum exports are reported at 1.1085 mmt, down 13% from the same week last year and 20% below the five-year average.

The attached chart shows the weekly trend in both CWRS and CWAD grades in licensed western export terminals since the start of the crop year. As a percent of total wheat stocks, inventory of CWRS as a percent of all wheat stocks in store has fallen from 55.4% in week 1 in August to 45.8% in the most recent week. As well, stocks of durum falling in the top two grades as a percentage of total durum stocks has fallen from 43.7% to 19.8% in week 16, after recovering from a week 15 low of 15.1%.

This year will be a challenge for exporters, forcing creativity and the need for new markets and uses for the varying quality of Canada's crop.

This week's poll asks what you think we can look forward to in row-crop prices (soybeans and corn) over the balance of the crop year. We encourage you to share your thoughts on this poll, found at the lower right side of your DTN Home Page. 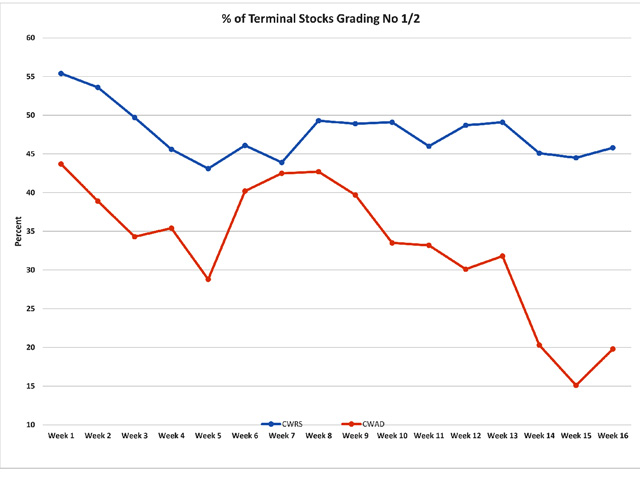