Saskatchewan Agriculture's Crop Report as of the week ending October 17 shows harvest stalled for the third consecutive week with 81% of the harvest complete. The five-year average is reported at 97% complete, while the 10-year average is at 95%.

A similar situation was last seen in 2009, when 76% of the crop was off as of Oct. 5, according to historical reports, while limited activity resulted in an advancement of only 4% in the following four weeks as of the November 2 report. Sask. Ag then reported 92% of the crop off by Nov. 10 and 97% of the harvest completed by Nov. 17.

Wet fields will be a factor for many areas, with 57% of the province reporting surplus topsoil moisture. A glance at provincial moisture maps shows this surplus area most concentrated in the northeast of the province in and around the Melfort/Tisdale/Nipawin areas, although surplus areas are seen scattered across the entire province. With sloughs already full, concerns exist over where next spring's runoff can go.

The only spring crop which has seen harvest completed is dry peas, while lentil harvest is close to finished at 95% complete. All other crops are estimated to range from 25% complete for chickpeas to 87% complete for barley. The attached graphic highlights the estimated volume of pending harvest given Statistics Canada's acreage estimates combined with Saskatchewan Agriculture's most recent yield estimates.

At 78% complete, the largest crop to come off in Saskatchewan is canola, with an estimated 2.1 million metric tons to come off, which reflects an estimated 11.4% of the total Canadian canola crop. In dollar terms, based on today's street prices, this production would represent close to $1 billion in crop receipts.

The next largest crop to come off is spring wheat where harvest is 80% complete. There remains an estimated 1.8 mmt yet to be harvested, which reflects an estimated 8.7% of the total estimated prairie crop size. Also standing out on the attached chart is the remainder of the Saskatchewan durum harvest, which is estimated to be 76% complete. Current estimates suggest there is an additional 1.5 mmt to be brought home, which is an estimated 20.2% of the expected total prairie durum crop.

Do you agree with the current provincial government estimates of the amount of cropland harvested as of the latest crop reports? Please share your thoughts on DTN's latest poll which is found on the lower-right side of your DTN Home Page. 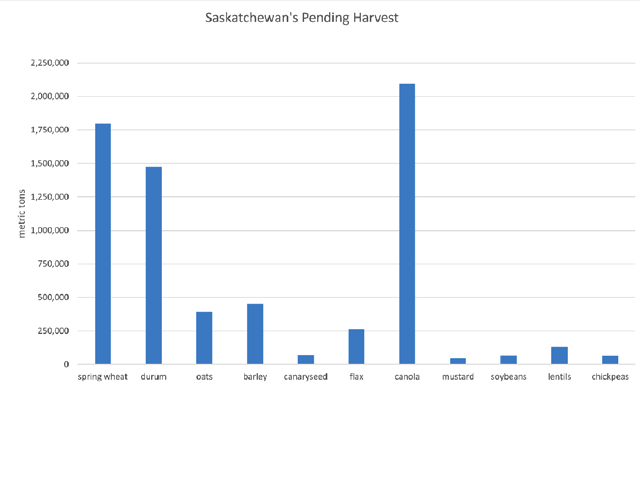