As expected, Tuesday's Statistics Canada Production of principal field crops report provided estimates suggesting a larger Canadian crop is on the way. The total of production estimate all major grains reported by Statistics Canada is shown at 87.2 million metric tons, up 3.3 mmt or 3.9% from 2015 although still well below the estimated 97.8 mmt achieved in 2013. The prairie crop is estimated at 67.2 mmt, up 4.2 mmt from last year but well below the record 76.6 mmt produced in 2013.

Today's report may have had a bearish impact on markets, with hard red spring wheat futures extending overnight losses while both the Sept/Dec and Dec/March spreads weakened. Since July 26, the Sept/Dec spread has moved from a 16-cent carry (December higher than the September) to a 7 1/2 cent inverse (Sept above the Dec), while ended at even money this session.

While today's canola production estimate was within the range estimated in pre-report surveys of 15.9 mmt to 20 mmt, today's estimate of a 17.024 mmt crop was below the majority of the estimates which exceeded 18 mmt. It was also 1.4% below the 17.231 mmt estimated for 2015 and 5.5% above the five-year average. A Manitoba analyst tweeted that today's estimate may still be high, while at least one Alberta grain industry representative remains fixated on a crop well above 20 mmt, which will certainly spur debate as we move forward.

Over the past five years, the final November estimates were higher than the mid-season July estimate in four of the five years, with the five-year average being 12.7% higher. It's hard to forget the 2015/16 season when the July estimates revealed a 13.343 mmt crop only to be revised higher by 3.9 mmt to reach the 17.231 final estimate reported in December 2015. Today's canola trade closed higher, with the November contract closing above resistance, while the nearby Nov/Jan spread remains neutral at a level which points to a neutral commercial sentiment.

Canada's corn production is estimated to fall by 8.9% from 2015 to reach production of 12.349 mmt, down 1.2 mmt from last year and 3% below the five-year average. The impact of Ontario's hot and dry summer is clearly seen in today's data. Manitoba's production is estimated to be higher at 937,300 mt with a decline in estimated yields offset with a 75,000-acre boost in acres planted to 320,000 acres. The key to production going forward will be Ontario, where a slight decline in acres seeded is expected to reach an estimated yield of 153.5 bpa, down sharply from the record 170.6 bpa achieved in 2015.

Time will tell on Ontario's potential. While the past does not necessarily predict the future, the final November estimates for corn have averaged 8.9% higher than the July estimates over the past five years, which shows that Statistics Canada is typically conservative in their findings. At the same time, there has been some talk of Ontario yields at the 145 bpa level, including DTN contributor Phil Shaw who farms in southwest Ontario. As well, Ontario Agriculture's latest crop report indicates that some producers in hard-hit areas are looking to have crops silaged, while Statistics Canada's harvested acre estimate is reported at 98.3%, only slightly below the five-year average at 99.1% and perhaps not accounting for acres that are not combined.

A sharp boost in acres seeded to pulses such as peas, lentils and chickpeas on the Prairies has led to a sharp increase in expected production. Statistics Canada reported the average lentil yield at 1,326 pounds/acre, which is higher than the most recent Saskatchewan Agriculture estimate of 1,250 lbs/ac. Saskatchewan's current dry pea yield estimate is consistent with Statistics Canada average yield for the prairies. Given the excessive rainfall which has fallen over many areas of the province, today's estimates could prove optimistic for lentils and chickpeas.

Barley production is estimated at 8.704 mmt, with acreage near-unchanged combined with an estimated 6.5% increase in yield to 69.2 bpa. This represents a second annual increase to a three-year high in production and a 4.9% increase over the five-year average. Interestingly, the final barley production released in December has averaged just 1.6% higher than July estimates over the past five years, which suggests that the July estimates for barley are the closest to the final estimates achieved of all the major grains.

Oat production was estimated at 3.018 mmt, down 11.9% from 2015 and 7.4% below the five-year average. This is roughly equal to the lower-end of the pre-report estimated range of 3.1 to 3.9 mmt as compiled by Commodity News Service. This is due to an estimated sharp drop in acres dedicated to the crop while yield is expected to remain close to unchanged from last year. Over the last five years, the final oat production estimate has averaged 10.3% higher than the July estimate.

Focus will quickly shift from crop volume to crop quality as we move forward, as well as the railroad's ability to move this crop.

This week's poll asks whether you believe we've seen the lows in grain futures. You can weigh in with your thoughts on this poll question, found at the lower-right of your DTN Home Page. 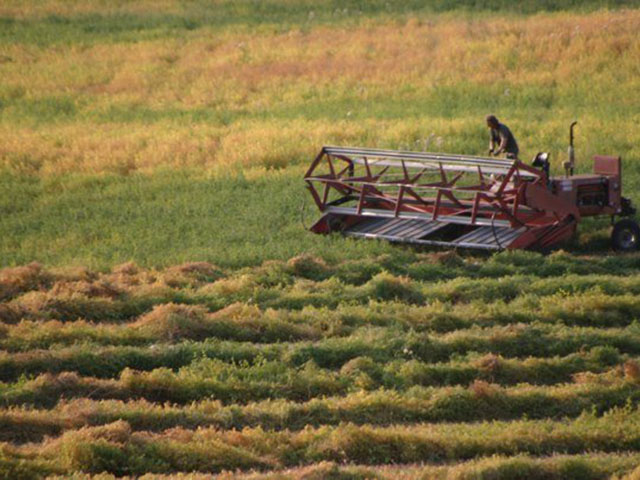