Tuesday's monthly USDA report was viewed as neutral for U.S. wheat with 2016/17 ending stocks estimated only slightly higher than expected in Dow Jones pre-report estimates. Total ending stocks are estimated at 1.105 billion bushels (30 million metric tons), which is up 12.6% from 2015/16 and would be the largest ending stocks seen since 1987/88. Of the five classes, the year-over-year change shows hard red winter stocks up 29.6%, white wheat stocks are up 20.3% and durum stocks up 17.9%. Year-over-year declines are estimated for soft red winter wheat of 3.2% and hard red spring wheat which is estimated at an 8.6% drop.

Current USDA estimates point to a reduction in global exports of wheat from 169.23 mmt in 2015/16 while estimated to be just slightly lower in 2017 at 168.43 mmt. This is also consistent with the International Grains Council, who has forecast global trade volume to fall by 2 mmt to 156 mmt in the upcoming year. Given today's 25 million bushel increase in the estimated U.S. export volume to 925 mb (25.2 mmt), total exports of wheat are expected to grow by 19% from the 2015/16 crop year. This could prove to be a challenging forecast and one that could weigh further on wheat prices in time if this volume fails to materialize.

Looking at the attached chart, the December HRS contract has struggled to find direction in recent trade but continues to hold above the $5.09 1/4 contract low reached on July 5. Tuesday's move failed to test last week's contract low, although also failed to challenge the $5.20 1/4/bu high reached on Monday while falling just short of printing a bullish outside trading bar Tuesday.

Tuesday's activity saw commercial traders as sellers, as indicated by the blue line in the second study which represents the December/March spread which weakened 1/2 cent Tuesday to minus 14 3/4/bu (March over the December). Noncommercial buying interest was behind Tuesday's 2 3/4 cent higher close, likely given the speed at which this group has grown their bearish futures positions. As seen by the histogram in the lower study, noncommercial traders, or investors, moved from a small net-long position of 746 contracts as of the week ending June 21, to a net-short of 3,268 contracts the week of June 28 and a net-short of 4,777 contracts the week of July 5. This is the largest net-long position held in over two months.

Investors may be growing concerned over the global supply and demand data released Tuesday. While the average of pre-report trade estimates pointed to USDA increasing the estimate for global wheat carryout in 2016/17, the estimate was instead trimmed 4.1 mmt to 253.7 mmt. Included in this estimate is a significant 13.34 mmt, or 3%, increase in total use to 729.34 mmt, largely due to an 11 mmt jump in wheat feeding. It's important to note that the end result is 253.7 mmt global carryout, which would continue to point to record-large global stocks while stocks as a percentage of global use would increase slightly to a bearish 34.8%. 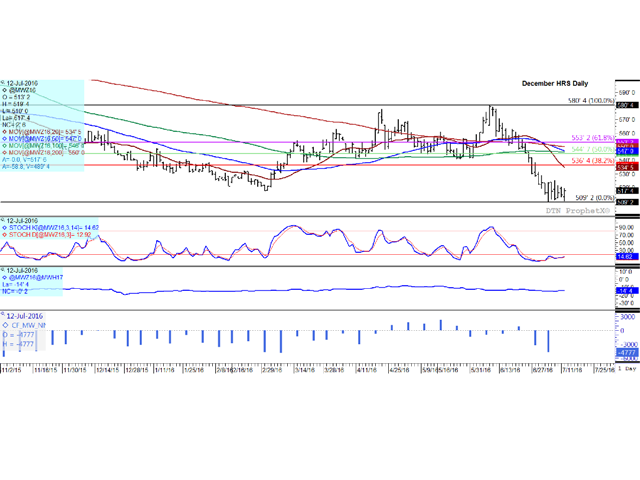