According to the USDA report released Tuesday, global wheat fundamentals are more bearish than previously thought, driven by a combination of both higher supplies and reduced consumption, although there was a muted response in futures trade Tuesday.

Global ending stocks were increased by 6.8 million metric tons given an increase in beginning stocks due to prior-year adjustments of 1.7 mmt (mostly China), a 400,000 metric ton increase in 2015-16 production seen in Argentina and Ukraine, along with a 4.7 mmt drop in consumption, again, largely focused on China.

Tuesday's market activity may suggest that the market is immune to the bad news and is close to reaching contract lows, or simply may not believe the data. Both nearby winter wheat markets posted only modest losses on Tuesday following the report, after recovering from fresh contract lows on the SRW and HRW markets to close near the mid-point of the day's trading range. SRW closed 1 cent lower, HRW finished 1/2 cent lower and HRS closed 1 1/4 cents higher (March contracts), hardly a bearish response. March/May spreads across all three contracts narrowed on Tuesday, a sign of commercial buying activity, while U.S. dollar weakness was a supportive feature.

Canada's export potential was increased by 1.5 mmt from last month to 22 mmt, just slightly higher than the current estimate released in AAFC's January supply and demand tables. The race for the second-largest global exporter is a tight one, after the forecast for 32.5 mmt expected to be shipped by Europe. The current forecast shows Russia shipping 23.5 mmt, while the U.S. is expected to ship 21 mmt.

One piece of supportive data in Tuesday's report is the shrinking stocks held by major exporters, using the International Grain Council's definition of Argentina, Australia, Canada, European Union, Kazakhstan, Russia, Ukraine and the United States. This volume fell slightly from the January estimate to 71.72 mmt or 30% of global supplies, up little given that stocks in these eight countries were 29.5% of 2014-15 global stocks. Canada is a contributor to the tighter stocks, with the current AAFC estimate of 4.2 mmt for Canada's 2015-16 all-wheat carryout the tightest seen in Statistics Canada data going back to 1981.

The Canadian Federation of Independent Business recently named a shortage of skilled labour as a top concern facing farm operations. Is this the situation in your area? You can weigh in with your thoughts on DTN's 360 Poll found on the lower-right side of the DTN Home Page. 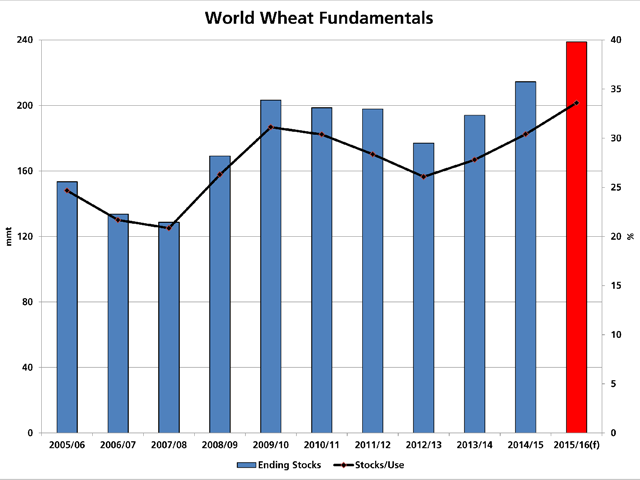