As of week 20, or the week ending December 20, Canadian Grain Commission statistics show that western farmers have delivered 23.3026 million metric tons of all grains, 1.9 mmt or 8.9% higher than the same period last year. Mild winter conditions, the ability to capture attractive prices such as seen in the pulse markets and perhaps a fear of lower prices in other grains has led to aggressive producer deliveries, with deliveries of all grains 23% above the five-year average.

Shipments from the Prairies also continue at a rapid pace, given favorable weather conditions and declining competition from competing commodities. Statistics Canada's most recent railway car loadings data shows January-through-October movement of coal is 17.4% below year-ago movement while the number of cars loaded with crude oil was 16.5% below year-ago levels, being just two examples. Total crop year shipments by licensed prairie elevators totaled 18.521 mmt as of week 20, close to 1.2 mmt or 6.7% above the same period last year and 24.9% above the five-year average.

The attached chart shows 2015/16 licensed terminal exports, as compared to 2014/15 and the five-year average from 2010/11 through 2014/15 for selected crops in the first 20 weeks of the crop year. As indicated by the blue bars, both wheat (excluding durum) and canola volumes are higher than year-ago levels, while the total volume of grain shipped through licensed terminals is 690,200 metric tons or 4.3% above year-ago volumes. Wheat exports are 6.5% above year-ago volumes and canola exports are 12.7% above the volume shipped in the first 20 weeks of the crop year in 2014/15.

Also indicated on the chart, movement through western ports (Vancouver, Prince Rupert, Churchill and Thunder Bay) is up 6.2% from last year, accounting for 75% of the total volume in the first 20 weeks of 2015/16. Year-to-date movement through eastern ports is down 1.1% from year-ago levels. Both are well-above their respective 5-year averages.

What do you think will be your greatest challenge in 2016? You can weigh in on DTN's poll which is found at the lower right of your DTN Homepage or send comments directly to Cliff. We value all of your past contributions to DTN's weekly polls. 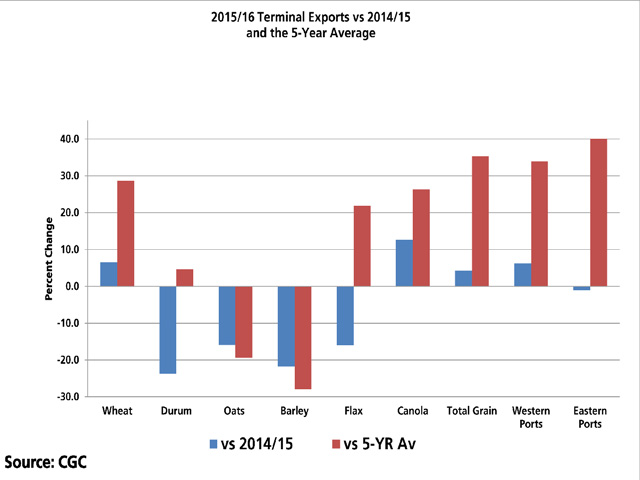