Exports of lentils were reported at close to 635,000 metric tons in October, the highest volume seen since the start of the crop year in August and likely the largest movement in any given month ever. Year-to-date exports are reported at 1.150 million metric tons, well-above the 600,000 mt reported in the first three months of 2014/15 and well-above the five-year average of close to 405,000 mt.

Close to 52% of this volume has been exported to India year-to-date, which compares to the 33% of the total volume shipped to India in the first three months of the 2014/15 crop year.

The most recent AAFC supply and demand estimates have suggested that Canada will export 2.200 mmt in 2015/16, very similar to last year's volume, although Friday's Statistics Canada production report has boosted expected production by 211,400 mt since the release of the September estimates, suggesting that exports will grow, given that current volumes are well-ahead of the pace needed to meet the earlier demand estimate. 2015/16 production is estimated to be 19.4% higher than 2014/15 and would represent a fresh record production for this crop.

Roughly 58% of this volume has been exported to India, which compares to the 44% of total volume imported by this country in the first three months of the 2014/15 crop year.

The November AAFC estimates suggest total exports to be slightly lower than 2014/15 at 2.9 mmt, which is largely due to a year-over-year drop in production of over 600,000 mt, given an estimated drop in harvested acres as well as an estimated drop in yield. The current pace of exports are well-ahead of the pace needed to reach the annual export target, although supplies may be the limiting factor.

The November AAFC supply and demand estimates indicated total export demand pegged at 85,000 mt. Actual exports are well-above the pace needed to achieve this volume and stocks are likely to be much tighter than expected given that estimated production has also fallen 17,000 mt since the release of the September estimates on Oct. 2.

This week's poll asks if you think the move towards taxing carbon in this country will be detrimental to your farm's profitability. You can weigh in with your thoughts on DTN's 360 poll which is found at the lower right of your Home Page. 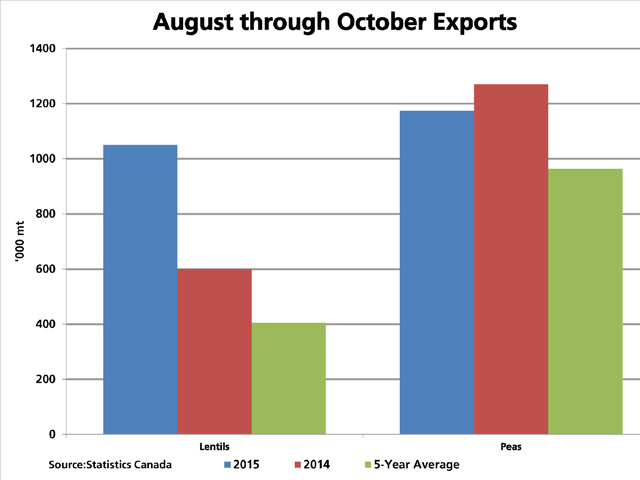 Cliff Jamieson
12/10/2015 | 11:16 PM CST
You could very well be right, although at present, new-crop pricing opportunities for peas and lentils for fall 2016 are historically attractive and will lead to keen producer interest. Some contracting companies are offering an Act of God clause in their contracts, or in other words, are accepting the production risk. There's a great deal riding on the winter pulse crop in India, while time will tell how this will materialize. I've noticed comments from India suggesting that the back-to-back droughts which has led to the increased demand currently faced has never before carried on into a third year.
Elaine Shein
12/10/2015 | 9:17 AM CST
Thanks for your comment. I've passed your comment on to Cliff (he was at DTN's Ag Summit the last few days) and he'll be responding shortly.
FBCltd
12/9/2015 | 9:09 AM CST
considering there was a virtual "no buy" policy back in Sept, this is great news..... but the only cure for high prices is high prices and next year supply will exceed demand as farmers chase 'last year' prices