The stock market thought so. The Dow surged 932.27 points, its best day since 2020. Investors had priced in a 95% likelihood of a three-quarter percentage rise. They were relieved to be told they were wrong.

That markets were expecting such a drastic move underscores how rapidly the interest-rate outlook is darkening. The last time the Fed raised rates 75 basis points was in 1994.

When I last posted on interest rates, just a month ago on April 4, Powell was surprising the markets with talk of a half-point hike. There was no thought then of even bigger boosts. (https://www.dtnpf.com/…)

Considering the recession risk higher rates pose, Powell's dismissal of three-quarter point hikes did indeed sound like good news. But by taking such bigger increases off the table, the Fed risks underestimating the strength and durability of the inflationary forces troubling the economy. The consequences of such an underestimation could be profound.

Give the Fed this. It's trying to do something it's never done before -- bring the inflation rate down several percentage points without causing a recession. To pull that off, it needs to raise rates with a Goldilocks touch -- not too slow, not too fast, but just right.

As price increases accelerated last year, the Fed was clearly too slow. With its recent half-point increase, its promise to start shrinking its bond portfolio and Fed officials' tougher talk, the central bank is starting to pick up the pace. All of this convinced the markets to expect even bigger rate increases.

Powell's comment signals the Fed wants to avoid going too fast. Seeing signs that inflation has peaked and may start coming down, the Fed apparently thinks it is on the "just right" track. But is it?

Fed policy makers are predicting that by the end of next year their benchmark rate will reach 3.25%, up from between 0.75% and 1% currently. Inflation hawks doubt this would put real rates in positive territory.

If the inflation hawks are right, the Fed's half-point increases may be insufficient to bring inflation down. And there's danger in letting it stay high for too long.

The danger is that the public comes to expect high inflation and demand high wages to compensate. The result is a wage-price spiral in which inflation begets more inflation. Once that happens, history suggests inflation can only be conquered by extremely high interest rates that throw the economy into a deep recession.

By the hawks' thinking, then, the result of raising rates in smaller increments now is having to raise them to much higher levels later. Of course, the inflation hawks could be wrong. They were, however, right last year in thinking the Fed was behind the curve.

So, was Powell's comment good news? The day after its 900-point increase, the stock market plummeted a thousand-plus points, wiping out the year's biggest increase with its biggest loss.

Does that mean the market has decided the hawks are right and dismissing three-quarter point increases was a mistake? Or does it mean the market realizes that even with half-point increases, the Fed is taking a tough stance against inflation that will hurt corporate profits? There are market analysts on both sides.

One way or the other, though, rates are going up. They're going up faster than seemed likely a few months ago. If the hawks are right, they're going up even higher than the Fed is now forecasting.

In response to my previous post, a farmer I know in Illinois emailed me to say it was fortunate that farmers have locked in long-term money at affordable rates. We have to hope a great many have. 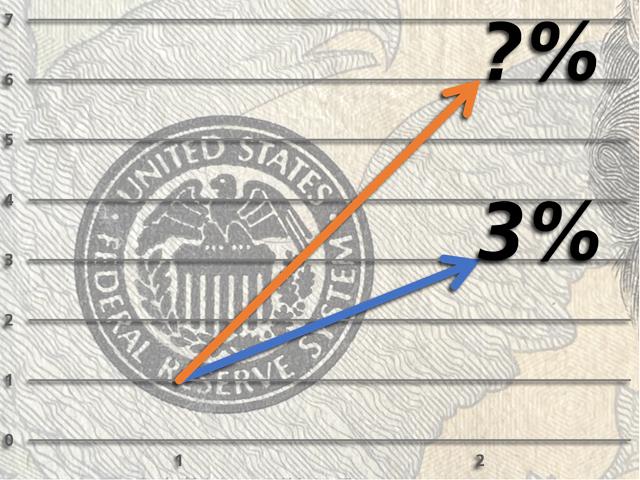