The "Beijing Biden" attack ads last year were always absurd. No American president would ever work to "Make China Great Again." Still, as president, Joe Biden has surprised some people with his approach to China, which has been as tough as Donald Trump's if not tougher.

The question is whether it's any smarter.

The new administration has continued Trump's 25% tariffs on many Chinese imports. It has doubled down on Trump's campaign against communications giant Huawei, offering financial incentives to countries that agree to keep out Huawei's equipment.

And it has intensified America's criticism of China, enlisting allies to join in condemning China's human-rights practices and its worldwide promotion of hacking. Through all this Biden has studiously avoided meeting with Chinese Premier Xi Jinping. Donald Trump met Xi three months after taking office.

One of the raps against Trump's policy was that it was capricious and chaotic, bashing China one moment, asking for help with getting reelected the next. In 2019 Kevin Rudd, a former Australian prime minister and a China expert, spoke for many when he said, "At present, you don't have a strategy. That's just a reality." https://www.washingtonpost.com/…

If Biden has been more consistent, his toughness has been mostly talk. It's fair to ask whether this president has any more of a strategy than his predecessor did -- and if he does, whether it's likely to be an effective one.

The Economist, for one, perceives Biden "assiduously building a strategic framework for countering and checking China's rise." (https://www.economist.com/…) The strategy, the Economist says, has two prongs: build America, blunt China.

But is "blunting" a strategy or an after-the-fact description of some reflexive tactics? If a strategy, how does it differ from the containment strategy the U.S. employed against the Soviet Union?

Most importantly, assuming blunting is a strategy, can it work?

In the famous 1946 "long telegram" from Moscow the diplomat who devised the containment strategy, George Kennan, emphasized America's miniscule stake in Russia. "We have here," Kennan wrote, "no investments to guard, no actual trade to lose, virtually no citizens to protect, few cultural contacts to preserve." (https://digitalarchive.wilsoncenter.org/…)

Precisely the opposite is the case with China today. The U.S. conducts enormous trade with China, its No. 3 trading partner. Among other things, the Chinese buy more than a fifth of U.S. ag exports. (https://www.dtnpf.com/…)

Deep economic entanglement with a serious geopolitical rival makes policymakers uncomfortable. That's why both countries in recent years have made stabs at economic "decoupling." (https://www.dtnpf.com/…)

Recent examples include Beijing's crackdown on Chinese companies whose stock is listed on U.S. exchanges (https://www.cnbc.com/…) and attempts by some Congressmen to limit Chinese ownership of American farmland (https://www.dtnpf.com/…).

So far, though, it's mainly the cabooses that have been decoupled. Most of the freight train is intact. While President Trump used to say the U.S. needn't do business with China at all, no one else is seriously proposing taking decoupling anywhere near that far.

American business would be vehemently opposed. For good reason. Just as Chinese companies covet the U.S. market, American companies are eager to do business in China. Who wants to give up a fast-growing market of 1.4 billion people?

Other countries certainly don't, and that's a significant obstacle for attempts to "blunt China." The administration's strategy envisions the U.S. leading like-minded countries in criticizing China's misdeeds and opposing its attempts to reshape the world order. But will the followers always follow?

Many countries, including such U.S. allies as Japan, Australia, South Korea and the European Union, trade more with China than with the U.S. As the Economist put it, "If forced to choose between the superpowers, some may pick China." (https://www.economist.com/…)

China poses an unusual problem for U.S. strategists, then. Unlike the Soviet Union, it's not economically isolated. It has deep trade and investment ties with much of the rest of the world, including the U.S.

Indeed, China's economy, which will inevitably become the world's largest someday, is the source of its power. The challenge it presents the U.S. is as much economic as it is military, at least for now.

Does Biden's strategy sufficiently take this into account? Can "blunting" work in a world in which everyone's doing business with China?

The strategy also has, as the Economist noted, a "build America" prong. But given Washington's bitter divisions over how best to build, it's questionable how much any administration can accomplish. The $1 trillion infrastructure bill is a start, and it has now passed the Senate with bipartisan support, but even its final enactment is far from assured.

The bottom line is that success won't come easily in either building or blunting. 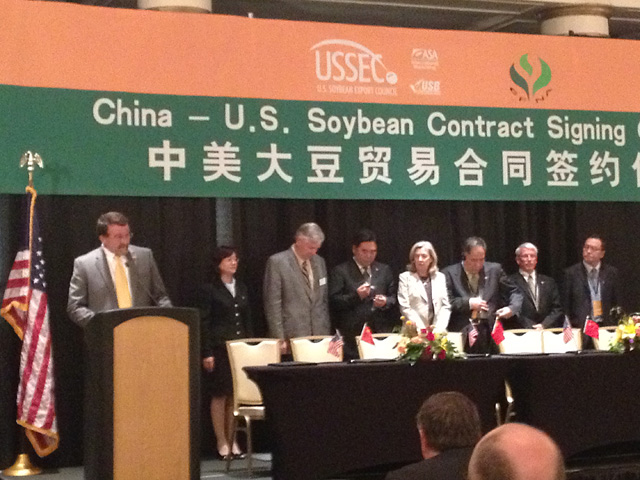