I won't mince words: Those photos of the floods in eastern Nebraska and western Iowa make me sick. The images bring to life what the flood's statistics, though impressive, leave abstract.

It's one thing to be told that $400 million of cattle and other livestock have been killed, that agriculture losses are approaching $1 billion, that 13 bridges have been washed away and 200 miles of highway will need repair in Nebraska alone. (https://www.dtnpf.com/…) But statistics can be mind-numbing.

Seeing is believing. Having lived in Omaha for nine years, I am shaken to see places I used to frequent now underwater, to see the road I used to drive to DTN's offices on ripped up. I'm distressed to get an email from friends who farm outside Omaha saying they are trapped in the farmhouse because the roads are impassable and the bridge gone. My heart aches for the many whose lives have been shattered, all the more because I know some of them.

Whenever floods rage anywhere, voices pop up asking, as the British newspaper the Independent did five years ago, "Why do we insist on building on flood plains?" (https://www.independent.co.uk/…) From a public-policy perspective, it's a fair question, for public policymakers must decide if, why and how much the public should pay for the damage floods inflict.

From a more visceral perspective, though, the question seems somehow off-key. Wanting to live next to water is as natural to our species as breathing. It's about easy access to water for drinking and irrigating our crops. It's about convenient transportation for conducting trade. It's about the beautiful vistas and the calming sound of lapping water. We humans build on floodplains because we always have.

It's no coincidence that the "cradle of civilization" was a land called Mesopotamia, Greek for "between two rivers" -- the Tigris and Euphrates. Ten thousand years ago, this fertile crescent was where hunter-gatherers were said to have turned into farmers. Later, Mesopotamia gave rise to the first four-wheeled wagons, as well as such important other firsts as common tools, the chariot, beer, domestication of animals, the sailboat and irrigation. (https://www.ancient.eu/…)

It's also no coincidence that so many of the world's major cities are built on rivers. London on the Thames, Paris on the Seine, Vienna and Budapest on the Danube, Rome on the Tiber. America's biggest city, New York, is another land between two rivers -- the Hudson and the East.

I plead guilty to being a sucker for the scenic value of water. My wife and I spend summers in a condo on the Oregon coast, on a bluff above the Pacific Ocean, looking out on a lighthouse a mile down the beach. Before we bought it, the realtor insisted we spend a couple of hours reading the "geological documents." Distilled to their essence, the dozens of pages of verbiage warned us that erosion could topple the bluff and the condo into the sea sometime in the next 50 years. We bought the place anyway. We love the view.

People who live near water have always had nature -- or, in the case of the biblical Noah, God -- to contend with. No year passes without major floods somewhere on earth. Hurricanes have wracked coasts in Florida and Texas and Bangladesh and Mozambique in recent decades; earthquakes have dumped tidal waves on Japan and Indonesia. My beloved Oregon is said to be due for a big earthquake any year now, and while a tidal wave might not reach as high as our condo it could bring on the fatal erosion we fear. (https://www.newyorker.com/…)

I recently read Kim Stanley Robinson's science-fiction novel "New York 2140." In the year 2140, climate change has raised the sea level 50 feet and most of Manhattan below 46th Street is flooded. New Yorkers, like Venetians, commute by boat; many of the novel's characters live in the Met Life Building, which the author chose because the building was designed to look like St. Mark's Campanile in Venice.

It's a good yarn. The ways in which life has changed in this New York of the future are ingeniously imagined. I enjoyed reading it despite Robinson's tiresome screeds against capitalism. And while he greatly exaggerates the extent of the likely flooding, his book is a reminder that at the current rate of climate change it's quite possible parts of Manhattan and Brooklyn will be underwater by 2140.

As sick as the photos of the current Midwestern floods make me, as certain as I am that these places will flood again someday, I of course want them to rebuild. People aren't always rational. Visceral instincts often prevail. Reconciling those instincts with sound policy in dealing with floods and other disasters will be a major challenge for our species in the years ahead. 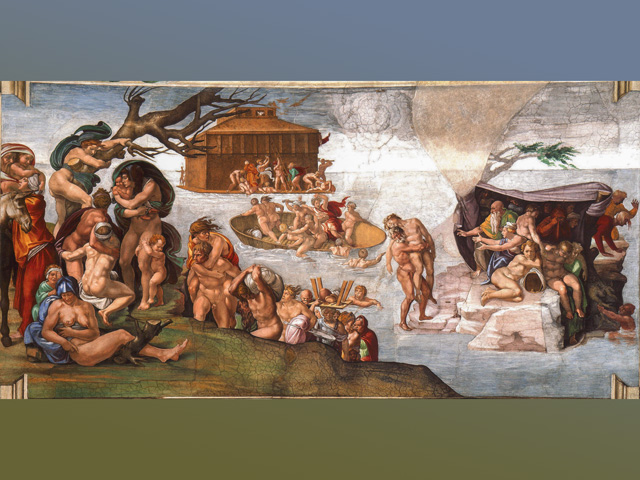