Flying home from a trip to London, thinking back on eight agreeable days seeing the sights, I kept returning to my day at the British Museum. It's one of my favorite places for pondering the story of civilization, and not just because it houses world-renowned artifacts like the Rosetta Stone, the Elgin Marbles and the Portland Vase.

I appreciate those as much as the next fellow, but the British Museum also displays humbler objects from the past that can stir as much wonder as the more famous archaeological finds. This time through the museum I noticed a 6,000- to 7,000-year-old Egyptian sickle that occasioned thoughts about the role of agricultural technology in the story of civilization.

Civilization, it's often said, got its start when nomadic hunter-gatherers finally settled down to become farmers. Where before pretty much everyone had to feed himself, farming created a surplus of food that relieved some descendants of hunter-gatherers of those duties, allowing them to specialize in other things societies value, like soldiering, building monuments, manufacturing stuff, writing great literature, even brewing beer.

As impressive as that sickle was in the development of Egyptian agriculture, it got me to wondering about the percentage of the population that had to work the farms to create Egypt's food surplus. I guessed it must have been high -- 80%? 90%? -- because agricultural productivity, while much improved from what it had been, could not have been very impressive using tools like that.

A photo of the thing is posted nearby so you can see for yourself. To my eye, it looks more like a toothbrush than a harvesting implement. Early Egyptian sickles like this one had flint teeth or blades set in a wood or bone handle (https://hort.purdue.edu/…). Later, the Egyptians used curved-blade sickles like the one in the old Communist hammer-and-sickle symbol. Either way, it must have taken a lot of Egyptians to harvest the wheat and barley that were the country's staple food crops. When I looked it up, one estimate (http://ancientegyptiansocialstrcuture.wikispaces.micds.org/…) was 80% of a population thought to have ranged between 1 million and 2 million people (http://www.reshafim.org.il/…).My guess wasn't so far off.

As the sources I've cited make clear, Egyptian agriculture was, for its time, and considering the country's location in the desert, very productive. The annual flooding of the Nile left silty soil that was ideal for crops, aided by the world's first major irrigation project (http://www.irrigationmuseum.org/…). In addition to sickles, the Egyptians had hoes, plows and other cultivation tools. Agricultural wealth was the foundation on which ancient Egypt built a great empire.

And yet, 80% of the population had to toil from dawn to dusk growing food. Think about how much greater ancient Egypt could have been had it been able to feed itself with only two-thirds of the population farming, as do the world's poorest countries today (https://ourworldindata.org/…). It could have supported a larger population -- Egypt's is more than 80 million today. It could have had so many more soldiers, craftsmen, merchants, artists and beer brewers. All it would have taken is more sophisticated agricultural technology.

Rich countries these days feed themselves with less than 5% of the population farming. In the U.S., it's only 2%. Sophisticated agricultural technology is one of the reasons they're rich. Without modern cultivating and harvesting equipment, irrigation systems and seeds and chemicals, less food would be produced by more people, food prices would be higher and living standards lower.

It's too bad that some whose standard of living benefits from agricultural technology don't appreciate it. Like clean air, which people only appreciate when it's missing, plentiful food is easy to take for granted.

As much as there are those who like to romanticize the past, it's hard to believe agricultural technology won't continue to get more sophisticated. What my walk through the British Museum reminded me was that from the ancient Egyptians through the present day, increasing agricultural productivity has played a key role in the story of civilization. 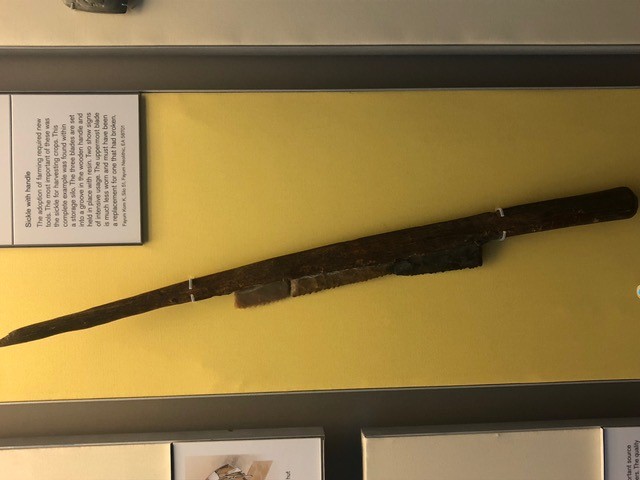 Thomas Runholt
7/20/2018 | 1:25 AM CDT
Mr. Lehner, I am late in reading and responding to this article, but have a thought about ancient Egyptian agriculture you may have overlooked. The Nile brought fresh soil and fertility to the country each year, making surplus production possible, but also flooded the farmland many months each year. That meant that most of the population was available for non-agricultural purposes half the time. Pharaohs built the pyramids and a civilization with impressive human creativity and that readily available labor base. They had a real comparative advantage in both natural and human resources for their time.