During the last two weeks, a trough of low pressure in the upper levels has been sitting over the Pacific Ocean and has been sending wave after wave of energy through the United States. That has resulted in above-normal temperatures for most of North America, and an active storm track that has pummeled California with record precipitation. That trough will continue to play this game for another week before it finally moves eastward next week.

In the meantime, it remains a very active pattern. A system is currently moving through the middle of the U.S. Jan. 11 and will bring widespread precipitation along and east of the Mississippi River, along with a risk for severe thunderstorms across the Southeast during the next couple of days. Two more systems will do something similar next week.

All added up, California has already seen its snowpack in the Sierras reach the seasonal average more than two months early. Whether it can hang on to that total without melting is questionable, but it remains well-above normal for this time of year. The same goes for most of the Intermountain West as only sections of the Central and Northern Rockies have had significant deficits. The coming systems should help these areas to add to their totals.

California is a special case as these systems have been pounding the state regularly and viciously. Still in a deep drought, flooding has been occurring over California's Central Valley, particularly on the northern side where rainfall has been the most consistent and continuous. Some places have seen a month's-worth of rain in a single day.

Other areas of the country have benefited from the active pattern as well, as drought has been reduced across much of the Lower Mississippi and Ohio Valleys and streamflow on both rivers have improved significantly.

The pattern has also been a much more mild one as well. Outside of some of the deeper snowpack in the Northern Plains, conditions across North America have been quite warm the last couple of weeks. We have seen temperatures more reminiscent of March at times across the U.S., especially toward the Gulf of Mexico, where highs have been into the 70s on a number of occasions, and a few times in the 80s across Texas.

That trough will be on the move next week though, in a pattern change that should remind us less like an El Nino, and one more like a La Nina. A ridge of high pressure will build across the West Coast and that will shut off the stream of moisture into the western states, giving them a reprieve from the onslaught of the last couple of weeks. In moving into the middle of the U.S. by the end of next week, temperatures will fall closer to or slightly below normal for the rest of January and into February. This is not expected to be accompanied by an arctic blast. Temperatures up near the North Pole are actually quite warm for this time of year, so the temperatures that drain down from northern Canada will only be seasonably cold. We have to remind ourselves that the third week of January is statistically the coldest month of the year, so temperatures back to or below normal will feel cold. That is especially true when we compare them to the last two weeks.

In a conference call with DTN's Long-Range weather forecasting team, Long-Range Team Lead Nathan Hamblin noted that though the pattern will change to a colder one, it will still remain active and continue well into February.

Like La Nina winters of the last two years, the upcoming pattern should support a steady diet of clipper systems that move from the Canadian Prairies into the North-Central U.S. then arcing through Southeast Canada. In the process, they usually bring down some colder air from northern Canada. But they also bring limited precipitation to the Canadian Prairies and the Plains before they can pick up moisture from the Gulf of Mexico, leaving the Ohio Valley and Northeast with heftier precipitation. Such a pattern is being forecast by longer-range models.

Hamblin also noted that the Arctic looks to be mostly shut off from the pattern, which means that there should not be another visit from the polar vortex for the next several weeks. He noted though, that things can still change as we are talking about the pattern two to four weeks from now and any opening in the polar vortex could mean a quick visit under these new conditions. 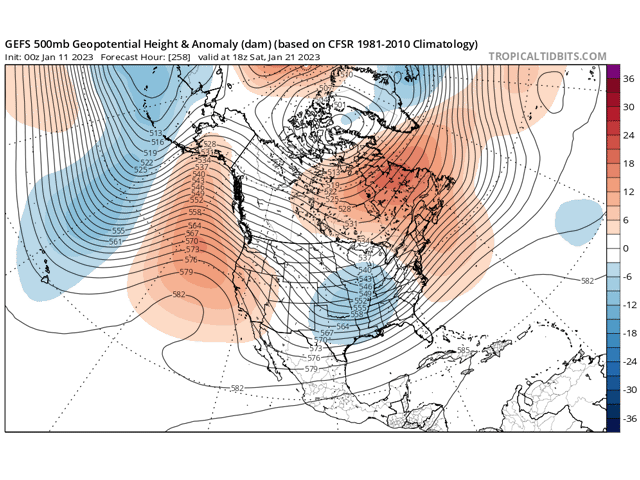