Drought has been a major influence on California for almost three straight years. Moderate drought has been in the Central Valley of California going back to February of 2020 with a significant worsening of drought conditions across the state in late 2020 and 2021.

Exceptional drought, the highest category of drought on the U.S. Drought Monitor, has been in significant portions of the state between May and December 2021, and again since May 2022. But that does not include some of the most recent precipitation that occurred during New Year's weekend. That storm produced very heavy rainfall in the Central Valley, and significant heavy snowfall in the Sierra Nevada Mountains.

According to the California Data Exchange Center, a division of the California Department of Water Resources, the snowfall in December 2022 has built up 174% of normal snow-water equivalent for this date, already more than half of the total snowpack that typically falls prior to Apr. 1. Farther down into the Central Valley, the recent rainfall brought widespread areas of more than an inch and several areas toward the northern end of the valley with over 3 inches of rain. That led to some flooding and one death reported.

Water usage by California's agriculture and population depend greatly on Sierra snowpack, which accounts for roughly 30% of the total water usage in the state. Therefore, it is important to hit the normal snowpack prior to Apr. 1 to maintain adequate water supplies for not only those in the Central Valley but also to help water managers throughout the state.

While snowpack is currently outpacing the average, it is important to note that winter is the wet season in California, and a time when the state counts on building that snowpack to supply itself with water through the hot summer when rain is a rare occurrence.

The state may be roughly two-thirds the way there through Jan. 1, with three months left to go, but a similar situation was noted just last year. Heavy precipitation in Dec. 2021 led to a good start on the snowpack for the 2022 season, but La Nina's influence to keep a ridge of high pressure over the state and the storm track well off to the north led to the third-lowest snowpack at the Apr. 1 deadline. The state could ill-afford another long stretch of dry weather.

Fortunately for the state, the pattern remains active here in January. A trough of low pressure in the North Pacific will send wave after wave of precipitation into the state over at least the next two weeks, building additional snowpack in the Sierras, and also filling soils with rain elsewhere in the state. Further reductions in drought across the state should be expected in the coming weeks.

Looking at the long-range outlook, the DTN forecast turns drier in February as the typical La Nina pattern of a dry, western ridge returns for most of the month. The forecast is more optimistic in March, however, with a return to a more active pattern. With continued precipitation during the next two weeks and an active March, California's snowpack may set up to give the state a good boost for both agriculture and human activity before the state turns hot.

California is not the only place to see good snowpack so far this season. Most of the Pacific Northwest, Intermountain West, and central and southern Rockies are reporting near- or above-average snowpack for this date. Some of the drier areas are in the northern Rockies, which feed the Missouri River. These areas should benefit from the continued active pattern as well. The northern Rockies may benefit from a more active pattern there in February and potentially in March as well. Overall, this is shaping up to be a good winter for the West as the effects of La Nina start to wind down.

You can find more about California's snowpack here: https://water.ca.gov/…. 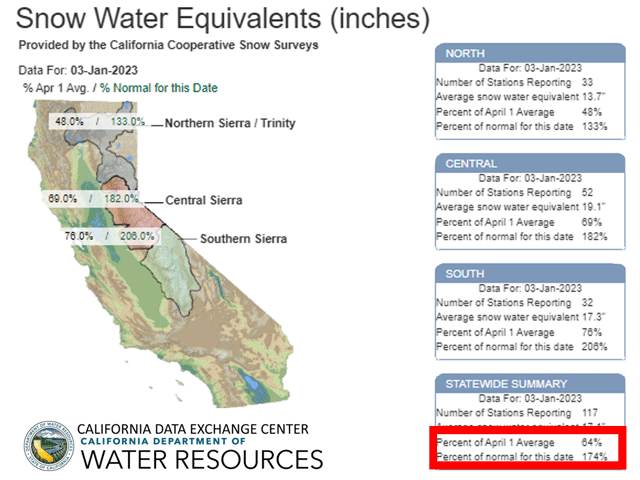