It is an early winter blast of arctic air across the United States and it definitely feels like it. This past weekend, arctic air spread across the country behind a strong cold front. While it was not excessively cold down to the Gulf Coast, temperatures did fall well enough below normal to feel like winter, which is only a few weeks away.

The cold will continually be supported by pushes of arctic air through this coming weekend. But the pattern will eventually change and we should see more moderate temperatures for a lot of areas during Thanksgiving week.

Before then, several blasts of cold will bring low temperatures down into the 10s Fahrenheit as far south as the Texas Panhandle, Oklahoma, Missouri, and the Ohio River Valley at various points throughout the next five or six days. Temperatures that cold are likely to turn any winter grains dormant or at least start the process for winter hardiness.

On top of that cold, snow fell across the southwestern Plains on Nov. 14 and spread northeast into the Midwest for Nov. 15. That snow is diminishing but the additional pushes of arctic air will create more light snow events. Accumulations are not going to be very high, but they are not going to really melt either, as temperatures stay below freezing for the northern half of the country. The snow in the southwestern Plains and into Missouri will, though it is hard to determine how beneficial that might be to winter wheat that is in extremely poor condition in this region.

This cold pattern is being supported by a widespread trough across the U.S., though it is not one single trough and more of a conglomeration of smaller disturbances swirling around. That would be cold enough, but a ridge across Alaska and northwest Canada is feeding that arctic air southward and several records could be broken during this stretch.

This pattern will evolve next week though, becoming more progressive. The trough will lift northeast into eastern Canada and the Alaskan ridge will all but vanish. That will allow a brief ridge to develop over the U.S. early next week, helping to slowly ease the cold out of the country.

A trough will move through next week though. Models are having a difficult time deciding whether or not to create a storm system right around the Thanksgiving holiday for the eastern half of the country, but all the ingredients seem to be there.

This time, the storm will have limited access to cold air, and precipitation would most likely be liquid for most areas except toward the international border, where the Canadian trough will still be able to keep the warmth from spreading too far north and snow cover in the Northern Plains will have a difficult time melting.

Confidence on any forecast you see for the next few days should be low until we get into next week and see how this trough and storm system may develop.

But at least the arctic air should be gone. Temperatures closer to what we expect in January will be replaced by seasonably cold ones with warmth out ahead of the late-week storm. It may be difficult to get the cold out of the east coast, but most areas between the Rockies and Appalachians should enjoy a reprieve from the current stretch of early winter. And even some wild above-normal days could follow for the last few days of November going into early December. That would be sort of a mirror to the end of October and into early November, at least temperature-wise.

Join me for the 2022 DTN Virtual Ag Summit Dec. 12-13 where I will talk about the rest of the winter weather outlook in more detail and what that means for agriculture going into the 2023 growing season. Get all of the information you expect from DTN, from the comfort of your home or office. For details on the agenda and how to register, visit www.dtn.com/agsummit. 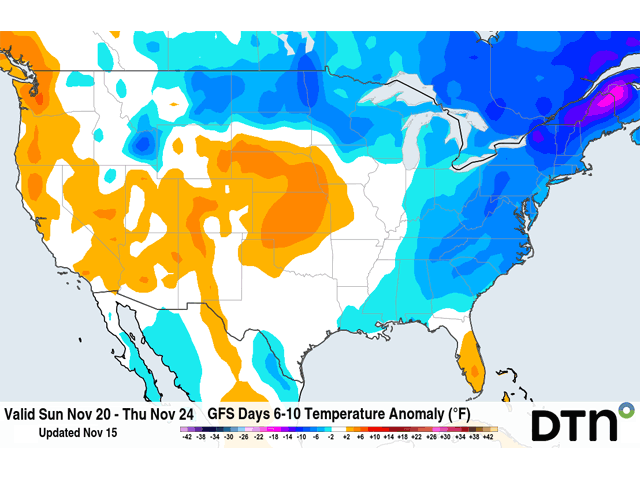