Writing to you on Oct. 18, it is cold. Near-record cold in fact. Temperatures east of the Rockies have plunged well-below normal for this time of year. Some areas are seeing low temperatures 20 to 30 degrees below where they average for the date. Widespread frosts and freezes have occurred so far down to Oklahoma and northern portions of the Gulf states. For Oct. 19, the temperatures get even colder for the Southeast and temperatures below the freezing mark may make it down to the Gulf Coast in Mississippi, Alabama, and the Florida Panhandle. Should that occur, it would be about a month before the first frosts for this part of the country -- very cold air. On the flip side, the western U.S. is seeing well-above normal temperatures and Los Angeles is forecast to reach near 90 Fahrenheit Oct. 19.

What is causing this massive difference in temperatures? Just look up. The upper-air pattern features a strong ridge in the West and a deep trough in the East. This amplified pattern is being stuck in place by another ridge up in Greenland, referred to as a blocking ridge. Ridges up around the Arctic Circle tend to cause patterns to stall out or stagnate. If they are particularly strong, the blocks can last for weeks at a time, but this block will not last that long. Models forecast this block to shift eastward this weekend and that will get the proverbial ball moving, so to speak.

The weakening is due in part to convection along the equator. I have mentioned it in this space before, but the Madden-Julian Oscillation, which describes an eastward-propagating area of enhanced thunderstorms, will be on the move and that will reduce the influence of ridges. The pattern will flow a little more freely.

The ridge across the West will move to the eastern U.S. and Canada and a trough will move down the Pacific Coast this weekend and that will stagnate somewhat next week. That pattern will mean cooler air will move through the western half of the U.S. next week. The trough will send a couple of pieces of its energy eastward throughout the week, and they will try to bring their cold air eastward into the Plains and potentially parts of the eastern U.S. They may succeed briefly, but the overall pattern of colder west and warmer east should hold for the week.

That western trough and its subsequent pieces of energy should cause storm systems to form east of the Rockies and head northeast. They favor precipitation chances in the Plains and Midwest and the potential for severe weather as well. Neither are guaranteed, however.

Models have had decent agreement on a storm system moving through the Plains and Midwest on Oct. 23-25 but have had less agreement both between and amongst themselves to definitively say that precipitation should be expected next week. A colder shot for the Northern Plains, potential for snow in the Canadian Prairies, and strong winds are all on the table, but getting rainfall into hard red winter wheat country from Nebraska to Texas may prove tough to do.

But there will be more chances behind that one impulse. A cut-off low-pressure center currently off the coast of California may be ejected through the country next week. Models disagree with how that low will be treated and could cause more precipitation across the Plains and Delta. Another push from the trough should come near the end of next week. It looks to be an active period going into early November, but that may not translate to the precipitation chances we might expect, or in some cases hope for.

Winter wheat establishment is going poorly in the Central and Southern Plains and they are in need of more rainfall as deep drought has taken over the region for a long time now. Any rain would be helpful for establishment. Under the trough, the Pacific Northwest should see better precipitation to help their drought worries, but the Midwest may not see much either.

With more energy flowing through the system instead of getting stuck, models will likely change the way they look in the forecast for next week. What might look like a good chance for rain today may disappear tomorrow, or move to a different region or time. The opposite may also occur. It will probably be a chaotic week or two of weather before the blocking is re-established around the second week of November. 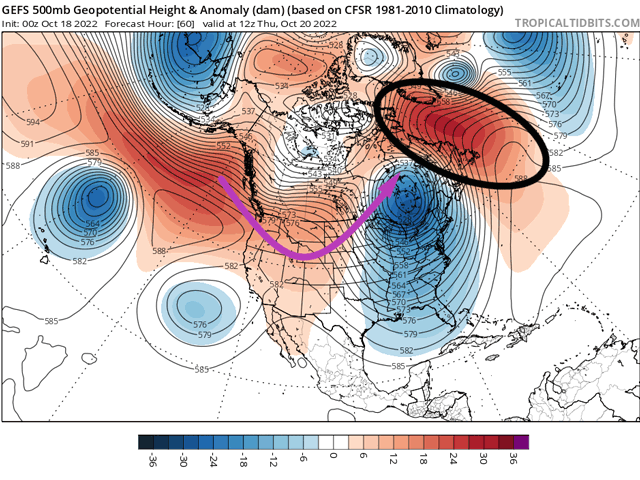